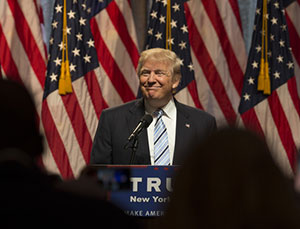 Global stocks were mainly lower in the morning hours as geopolitical concerns about China, Donald Trump, the Brexit, and more leak from the World Economic Forum in Davos, Switzerland. On Monday, U.S. markets were closed in observance of Martin Luther King, Jr., Day.

The Dow Jones Industrial Average projected a 45-point decline as investors prepare for a busy day of earnings reports. The Dow turned down as much as triple digits earlier as investors eye the upcoming inauguration of President-elect Trump and new details about Britain's "hard Brexit" plans.

The top stocks to watch this week include banking titan Goldman Sachs Group Inc. (NYSE: GS), media giant Netflix Inc. (Nasdaq: NFLX), and conglomerate General Electric Co. (NYSE: GE). Though Tuesday includes a quiet day of economic data, look out for the Empire State Report, which will provide the first glimpse of 2017 into the performance of the U.S. manufacturing sector. In addition, watch for speeches from members of the U.S. Federal Reserve.

Trending: The Best Stocks to Buy for January 2017

The retail sector is back in focus thanks to the number of mass layoffs that are expected in 2017. Over 15 major U.S. companies laid off workers in 2016. And that trend is expected to continue thanks to declining sales, poor foot traffic in brick-and-mortar stores, and the increasing popularity of e-commerce. Here is a list of six companies that have planned mass layoffs in 2017.

With the World Economic Forum in focus in Davos, Switzerland, gold prices have added 1.6% during pre-market hours. Attendees at the event have expressed concerns about Britain's exit strategy set for May 2017. On Tuesday, British Prime Minister Theresa May said her country will not seek a Brexit plan leaving it "half in, half out" of the European Union.

Crude oil prices were choppy in pre-market hours as investor optimism remains mixed over the progress of the OPEC crude deal to cap excessive production. Saudi Arabia has promised to strictly adhere to the the agreement; however, U.S. production continues to climb and threatens the global market share of the world's largest oil cartel. But the real trend moving oil prices higher has been a weaker dollar.

Money Morning Global Energy Strategist Dr. Kent Moors breaks down the impact of rising U.S. oil production and explains what matters most: How the uptick is affecting you and your wallet. Check out his latest insight on the global crude markets, right here.

But the big story is the upcoming inauguration of President-elect Donald Trump.

The inauguration of President-elect Donald Trump is Friday, Jan. 20. The event has investors and markets anticipating what he will say when he speaks to the nation as U.S. president for the first time.

But there's one other president who will move the markets this week.

Investors are largely ignoring statements from this world leader after the annual World Economic Forum in Davos, Switzerland, kicked off Monday. While Britain's Teresa May is garnering many headlines this morning, this president has become the star of the event, where he plans to defend globalization and his nation's rising economy.

Here's what you need to know before U.S. markets open.