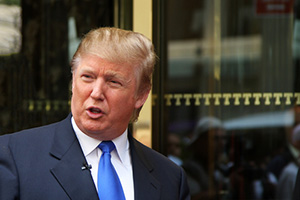 The Dow Jones Industrial Average slumped today after traders freaked out over a statement by President-elect Donald Trump on the impact of a strong dollar on trade between the United States and China.

Banking stocks slumped despite increased optimism over upcoming earnings reports from some of the top firms on Wall Street.

The Dow Jones slipped 58 points after traders digested the latest statements from President-elect Trump on the strength of the U.S. dollar and his views on drug prices. The iShares NASDAQ Biotechnology Index (ETF) (Nasdaq: IBB) fell more than 1.6% after Trump's statements.

Banking stocks also plunged as concerns over Trump's statements on the dollar weighed on the sector.

Biotech and pharmaceutical stocks also slumped after President-elect Trump said he would target drug companies that are charging the government too much money.

Crude oil prices were mixed thanks to a weakening dollar and chatter about Saudi Arabia's compliance in the OPEC deal to cap excessive production. The WTI crude oil price today added 0.2%. Meanwhile, Brent crude was off 0.5%.

Trending Story: A Gold Price Prediction for the Coming Bull Run: $5,236 an Ounce

"This is the perfect time to lay into ample supplies of gold and silver. I think that, here at the start of 2017, we're on the cusp of a good strong bull run for both metals," he said last week.

So where are gold and silver prices heading in 2017? Read Krauth's latest forecast, right here.