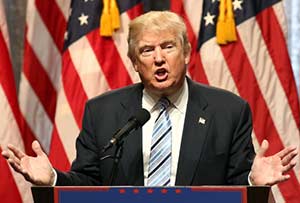 Donald J. Trump's presidential campaign was anything but traditional, and his swearing-in on Friday as the 45th president of United States won't be traditional, either.

You see, 44 Democratic representatives don't plan on attending (as of Tuesday morning). So we've compiled a list of all the representatives boycotting the inauguration...

Several lawmakers made the decision to boycott the inauguration weeks ago, citing political beliefs. Yet the number has grown in the last several days following Trump's verbal tussle with Rep. John Lewis (D-GA) over the weekend.

Lewis said he does not consider Trump a "legitimate president" because he believes the Russians helped get him elected. That prompted the president-elect to attack the iconic civil rights leader on Twitter.

After Lewis questioned Trump's legitimacy in an interview with NBC's "Meet the Press," Trump took to Twitter and dismissed the Georgia Democrat as "all talk" and "no action."

Democrats and Republicans alike criticized Trump for the remarks. Meanwhile, spokesman Sean Spicer and Vice President Mike Pence argued that it's Trump right to respond to someone who insulted him.

Lewis said Sunday that he will not attend Trump's inauguration on Friday. Ticket prices for the inaugural balls are $50 apiece so that working-class Americans, who helped drive Trump's win, can take part.

Here is a list of other representations boycotting the event...

With the Trump inauguration just days away, we've been keeping a close eye on how this event will move the markets.

And Money Morning Capital Wave Strategist Shah Gilani has just released his forecast for the markets this week, along with the best way to invest ahead of Friday's inauguration...