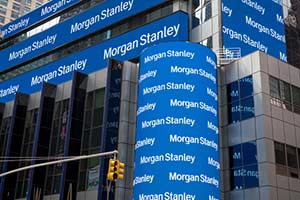 But today's top stocks to watch are moving on earnings and M&A activity...

Morgan Stanley stock slipped 1.3% to $43.46 in early trading despite posting its best fourth quarter since the financial crisis.

The firm's return on equity, a closely watched measure of profitability, came in at 8% for the year. That was up from 7.8% in 2015. However, it was shy of the 10% target laid out by CEO James Gorman.

Revenue in the firm's trading division, which trades stocks and stock-linked instruments, rose 7.4% to $1.95 billion from $1.82 billion a year ago. Meanwhile, debt-trading revenue, which has been a weak spot for Morgan Stanley, nearly tripled to $1.47 billion from $550 million a year earlier.

Reynolds American stock rose 3.68% to $58.08 in morning trading after reaching a $49 billion deal that allows British American Tobacco Plc. (NYSEMKT ADR: BTI) to acquire the 57.8% of RAI stock it does not currently own. The deal is for $59.64 per share in cash and stock.

BAT did not say how Reynolds would function under BAT ownership, but it is likely to be an American subsidiary based in Winston-Salem.

Clayton Williams Energy stock jumped 36.51% to $141.82 in morning trading after agreeing to be bought by Noble Energy Inc. (NYSE: NBL) in a $2.7 billion cash and stock deal.

Under the deal's terms, Clayton Williams shareholders will receive 2.7874 shares of Noble Energy common stock and $34.75 in cash for each share of common stock held.

The move is aimed at enhancing Noble's presence in the lucrative Permian Basin oil field. The deal includes 71,000 net acres in the heart of the Southern Delaware Basin in Reeves and Ward counties in Texas, which are a part of the larger Permian Basin.

Noble Energy said the number of rigs on the new acreage is planned to increase from one to three by the end of this year.