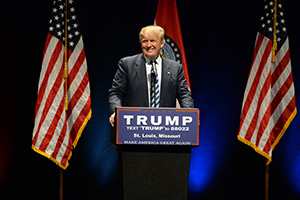 On Friday (Jan. 20) Donald Trump will be sworn in as the 45th president of the United States.

Trump's inauguration will host many Washington power players, such as former President Jimmy Carter and presidential runner-up Hillary Clinton. There will also be religious world leaders in attendance, like Catholic Cardinal Timothy Dolan. The day-long festivities, which will include meals, music, and speakers of note, comes with a hefty price tag: $200 million.

Private donors will be footing part of the bill...

Among them is Trump's Presidential Inauguration Committee, or PIC, an organization comprised of friends and loyal donors of the soon-to-be-POTUS who raised money as a group from private donors.

PIC will cough up an estimated $70 million for Donald Trump's inauguration, wrote The Washington Post on Dec. 13.

The remainder of the costs - about $130 million - will be shifted to the taxpayers.

Here's a breakdown of how much we'll pay...

The Cost of Trump's Inauguration

The costs of the actual swearing-in, the construction of the elaborate stage, and the official luncheon and dinner will cost slightly over $1 million, The Washington Post reported on Dec. 13.

And then there are the individual salaries involved...

A portion of that $130 million sum includes the costs for:

By far, the largest portion of the bill will go towards the extensive security, transportation, and cleanup for the event.

About 28,000 personnel, including the Secret Service, the FBI, and the National Guard, will be in attendance - which is not cheap. These costs could easily top $100 million on Friday, all of which will be paid for with taxpayer monies, wrote The New York Times on Jan. 17. The Times also reported that law enforcement and intelligence officials have been working for over a year to ensure that this transfer of power goes off seamlessly.

And Trump's inauguration will be the most expensive presidential coronation to date...

"Mr. Trump's inauguration week could well be the most expensive in history," The Times reported on Jan. 17.

In fact, President-elect Trump's inauguration will bring a 61% increase in costs when compared with that of President Obama's.

Regardless of the price tag, investors are anxiously awaiting Friday's ceremony.

And Money Morning Capital Wave Strategist Shah Gilani thinks that the next few days could be really profitable if the "Trump trend" continues, especially if you know how to read it right...

Here's how Gilani's playing the markets before the inauguration...

Federal employee don't get inauguration day off. I'm one