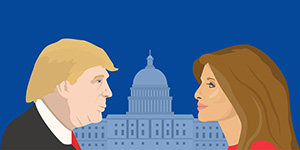 Mnuchin also fueled a sharp downturn in both Federal National Mortgage Association (OTCMKTS: FNMA) and Federal Home Loan Mortgage Corp. (OTCMKTS: FMCC) after saying that the two companies may have to run without creating new risks for the federal government.

The Dow Jones slipped 72 points after another busy day of earnings reports, economic data, and speculation on Capitol Hill over the incoming Trump administration's cabinet picks. Housing starts jumped to 1.226 million units in December, well above economist expectations. That is another sign that the housing market is healthy. Despite the positive news, housing stocks slumped. Shares of KB Home (NYSE: KBH) fell 1.8%, and Toll Brothers Inc. (NYSE: TOL) dipped 0.2%.

Weekly jobless claims fell more than expected last week. The number of Americans seeking state benefits declined by 15,000 to a seasonally adjusted 234,000, according to the Labor Department. Economists had anticipated that jobless applications would increase to 254,000 last week.

On the European front, investors are still reacting to an announcement that the European Central Bank will keep monetary policy unchanged. During a press conference, ECB President Mario Draghi said he has seen no evidence of increasing inflation.

Crude oil prices pushed higher after the International Energy Agency announced that it foresees global supplies tightening in the months ahead. The global energy agency said that it expects supply levels to tighten even before we are able to gauge the impact of OPEC's planned deal to cap excessive oil production.

But the big story is the inauguration of President-elect Donald Trump, which is scheduled for tomorrow.

President-elect Donald Trump will be sworn in as the 45th president of the United States on Jan. 20, 2017.

Here's more on the 2017 inauguration.