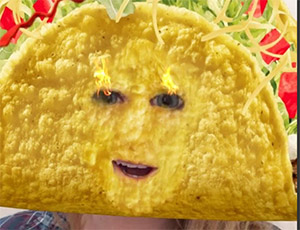 That growth is incredible, but investors still want to know, "how does Snapchat make money?"

And through its biggest revenue source, Snapchat can charge advertisers as much as $750,000 per day for a single advertisement...

Snapchat's biggest revenue source right now are "Sponsored Lenses." This feature allows Snapchat users to take a video or picture of themselves with different animations added to the shot.

For example, Taco Bell worked with Snapchat to create a sponsored lens for May 5, 2016 (Cinco de Mayo). The lens let users turn their head into a taco.

In just one day, Taco Bell's lens received 224 million views, according to Adweek.

20th Century Fox also created a sponsored lens in conjunction with the launch of "The Peanuts Movie" in 2015.

Through the lens, Snapchat users could add characters from the movie, like Snoopy and Woodstock, to their photos and videos.

And because of their popularity, Sponsored Lenses aren't cheap...

For holidays and special events like the Super Bowl, Snapchat Lenses can cost up to $750,000. During a nonpeak day, lenses can cost $450,000 or more, according to Financial Times.

Snapchat also has a similar product on a smaller scale for individuals and companies. Snapchat's "Geofilters" are ad-like invitations that allow other Snapchat users to know where a concert, fundraiser, or event will be held.

According to eMarketer, Snapchat was projected to make $102 million from branded lenses and Geofilters in 2016.

Snapchat is still developing its second revenue source. But it's already so popular that Snap wanted to renegotiate terms with advertisers a year and a half after it launched...

Snapchat launched "Discover" in January 2015. Through Discover, companies like ESPN and CNN can create snaps in the form of a short story.

Snapchat was charging its partners on Discover roughly $100 per thousand views of their story, according to Recode. For ad revenue, Snapchat took 30% if the media company sold ad space within its story.

But in October 2016, Snapchat wanted to change the terms for Discover partnership. This is an indication the advertising demand for Snapchat is growing.

According to Recode, Snapchat wanted to pay content partners upfront license fees, sell all the ads on its own, and keep all of the ad revenue.

Trending Story: How Do I Invest in Marijuana Stocks?

Like other social media sites, Snapchat generates the majority of its revenue from selling ad space.

However, Snapchat revealed a new physical product at the end of September 2016...