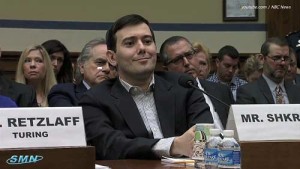 Martin Shkreli pleads the fifth in front of the House Committee on Oversight and Government Reform, Feb. 4, 2016.

Martin Shkreli, the pharmaceutical executive notorious for significantly raising the price of the life-saving drug Daraprim last year, can add a new job title to his resume: government whistleblower.

That's because thanks (in part) to Shkreli, the Federal Trade Commission (FTC) got a whopping $100 million check yesterday from drug company Mallinckrodt Plc. (NYSE: MNK).

It All Started with Martin Shkreli's Complaint

In 2014, Shkreli filed a lawsuit with the FTC against Mallinckrodt for acquiring the drug Synacthen from Novartis and then "shutting it down" – i.e., making the drug's patent unavailable – to protect its own product.

This monopolizing maneuver piqued the feds' interest, so Uncle Sam decided to keep a watchful yet quiet eye on Mallinckrodt.

Unaware it was under the microscope, an MNK division called Questcor then allegedly acquired the rights to an even greater competitive threat…

It bought the synthetic version of the drug Acthar, used to treat spasms in infants. After the purchase, MNK then shut down Acthar's patent as well.

After that purchase, Questcor turned around and raised the price of Acthar. Though its price at the time of MNK's purchase was not revealed, the feds did state yesterday that, in 2001, Acthar had cost only $40 per vial. By 2016, however, its price was more than $34,000 a vial.

So MNK agreed to cough up $100 million to the FTC. It will also release the license for developers to produce synthetic versions of Acthar.

For his part, Shkreli said he's happy to see that "more parts of my business history are being released that demonstrate my commitment to making great pharmaceuticals for rare-disease patients which have few choices."

Pharma Bro then made the case for pricing his drugs so high: "These drugs have to be expensive because of the very limited number of patients who suffer from these illnesses."

We almost liked you there, Martin.

We'd like to show you what's on the inside of these particular tech industries so you can see for yourselves why they're finally ready for breakout growth. Here are the best stocks to buy now to make the most money from them…

More articles for you …