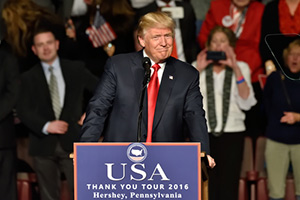 President-elect Donald Trump will be sworn in as the 45th president of the United States on Jan. 20, 2017.

The swearing-in ceremony for the Trump inauguration will take place at 11:30 a.m., and Chief Justice John G. Roberts, Jr., will administer the oath of office around noon.

After he is sworn in, President-elect Trump will deliver his inaugural address.

President-elect Trump and Vice President Mike Pence will then lead the inaugural parade from the Capitol to Pennsylvania Avenue.

According to The New York Times, thousands of military personal will represent each branch participating in the parade.

Later that night at 7:00 p.m., two official inaugural balls will take place. Each of the balls will be on separate floors of the Walter E. Washington Convention Center. There will also be an Armed Services Ball, which will take place at the National Building Museum.

President-elect Trump is expected to make remarks at all three events.

Americans are questioning what will happen to the marijuana industry under President-elect Donald Trump.