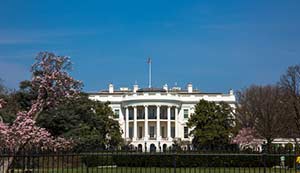 The Dow Jones Industrial Average today climbed higher as President Donald Trump was sworn into office. President Trump's inaugural speech was considered to be protectionist by many investors.

"From this day forward it is going to be only America first," Trump said shortly after being sworn in.

He also said his policy will focus on hiring American workers and buying American products. In recent weeks, the protectionist narrative has been seen as the potential downside of Trump's plans.

The markets had rallied since the election due to expected policies such as corporate tax reform, income tax reform, the rollback of major banking and energy regulations, and the repeal of the Affordable Care Act.

Must Read: Best Stocks to Buy for January 2017

Crude oil prices today were pushing higher ahead of a compliance meeting among OPEC and non-OPEC producers. During a meeting this weekend, global producers will create a compliance system to verify that participants are sticking to a deal to cap excessive crude production.

While it was a good day for oil prices, natural gas prices plunged more than 4.8% on the day. The commodity price plunged after weather forecasts called for warmer temperatures.

Money Morning Global Energy Strategist Dr. Kent Moors expects both oil and natural gas prices to continue rising by at least 20% in 2017. With energy prices set to climb, investors should take advantage of our three best energy stocks to buy in 2017. Check them out, right here.

But of course, the biggest story today was the inauguration of President Trump.

The latest big name to offer positive sentiment is Warren Buffett. The chairman and CEO of Berkshire Hathaway Inc. (NYSE: BRK.A; BRK.B), said he thinks the United States will "work fine" under President Donald Trump. So, what does Buffett expect for the economy and the stock market in the years ahead?