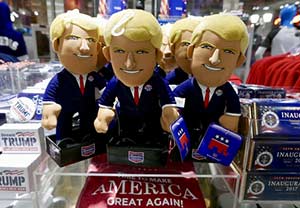 The Dow Jones Industrial Average today was rising on the first day of President-elect Donald Trump's term in office.

The swearing-in ceremony for the Trump inauguration will take place at 11:30 a.m., and Chief Justice John G. Roberts, Jr., will administer the oath of office around noon. Here's more on today's festivities and the one sector you need to follow under Trump.

On Thursday, the Dow slipped 72 points after another busy day of earnings reports, economic data, and speculation on Capitol Hill over the incoming Trump administration's cabinet picks. It was the fifth consecutive losing day on Wall Street. Meanwhile, the markets barely flinched after European Central Bank President Mario Draghi announced that his central bank would leave interest rates unchanged. Draghi said that the European bloc has still failed to see much inflation despite years of loose monetary policy.

Crude oil prices were pushing higher for the second straight day as investors await an upcoming compliance meeting among OPEC producers. The meeting will update us on the status of their planned cuts to cap excessive production. Optimism over the OPEC deal offset the impact of a surprise uptick in U.S. crude inventories. On Friday, traders will be looking at the weekly production rig count released by Baker Hughes Inc. (NYSE: BHI). Last week, Baker Hughes reported that the number of production rigs in operation in the United States fell for the first time in nearly three months.

But the big story is happening in Washington, D.C.

In addition to Trump's inauguration Friday, expect a lot of chatter about the president-elect's cabinet picks and the confirmation hearings taking place on Capitol Hill. Yesterday, Trump's pick for Treasury secretary, Steve Mnuchin, faced intense grilling from Senate Democrats, but there is little reason to believe that he won't be confirmed.

Meanwhile, Trump's pick to run the Department of Energy is former Texas Gov. Rick Perry, who also faced intense questions about climate change, domestic oil policy, and his 2011 calls to shut down the agency.

Despite all the political theater happening this week, it appears that only Sen. Jeff Sessions (R-AL) will face serious scrutiny.