That may seem preposterous to those who followed the more than three-year pounding gold mining stocks took from late 2011 through 2015 - including the biggest names in the industry. Newmont Mining Corp. (NYSE: NEM) fell as much as 77%. Yamana Gold Inc. (NYSE:AUY) plunged more than 90%.

And that's exactly the point... 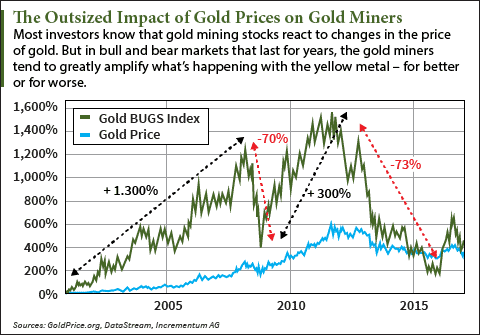 Right now we're in a period between the last gold bear market and the next gold bull market - obviously great news for gold mining stocks. 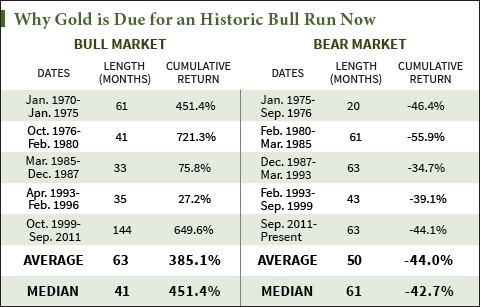 Anything close an average gold bull market will send gold mining stocks soaring 600%, and a particularly strong gold bull market - like the last one - could deliver gains as high as to 1,000% to 1,500%.

These gold mining stocks are your best bets...

I have spent a small fortune between, The Dine's letter, James Rickard's subscriptions and a host of others only to see gold go up and down and then up again and down again. Re-balancing my portfolio based on the comments of the experts only to find in the past 2 years I have pitifully lost approximately $20,000 between stock losses and subscription fees. Thankfully I have made it all back in the blink of an eye with a variety of Bitcoin, Ethereum and Litecoin. However I instinctively feel it would be wise to place a good chunk of my investment dollars in just one or two good bets in gold mines and just leave it alone for a year. No one knows the future but the patterns still favor gold as the best insurance not to mention physical gold as the best way to play it safe. No more experts just common sense. JVS Jacksonville, FL