The biggest oil price news this week was OPEC's first compliance meeting on Sunday (Jan. 22) since agreeing to a production cut on Nov. 30. But that's not the only thing moving oil prices today...

The compliance meeting ensured each country was living up to its part of the deal.

The chart below shows how the nearly 1.2 million barrels of cuts are distributed across the cartel. Despite bullish news that cartel members are on track to comply with the agreement, WTI crude oil prices have fallen to $53.07 a barrel, down 2.3% from last week's high of $54.32.

That's because the news out of OPEC hasn't all been positive, and there are even more issues affecting oil prices now. Here's the oil price news this week sending prices lower...

On Sunday, the Joint OPEC-Non-OPEC Ministerial Monitoring Committee (JMMC) held its first ever meeting to assess compliance with the Nov. 30 production cut agreement.

The JMMC reported the agreement was working and created new technical committee to research compliance.

"The JMMC expressed its satisfaction regarding the strong level of commitment to the agreed framework," reports a press release from OPEC.

During the meeting, the JMMC also created a Joint Technical Committee (JTC).

The creation of the JTC is a big step for compliance as OPEC and non-OPEC members officially agreed on how to keep track of the cuts. Because 11 countries outside of OPEC are participating in the production cuts, OPEC needs to arrange a special agreement between them.

The JTC is made up of representatives from OPEC members Algeria, Kuwait, Venezuela, and non-OPEC members Russia and Oman. The JTC will prepare a monthly report before each compliance meeting.

OPEC members' compliance with the deal is essential for higher oil prices.

Money Morning Global Energy Strategist Dr. Kent Moors says there will be an oil price floor above $50 a barrel as long as the deal stays in place.

The OPEC deal lasts for six months, so there will be at least five more compliance meetings for investors to keep their eyes on. But the agreement can be extended for another six months.

While the first JMMC meeting went smoothly, not all news out of OPEC was good for oil prices.

Libya is exempt from the production cuts since the country is still recovering from a civil war. That has allowed Libya to scale up its oil production. Libya's oil production has increased 254% since last year, its highest level in three years.

So Libya's production increase since November more than offsets the combined production cuts of Algeria, Ecuador, Gabon, and Qatar.

And Libya's production increase isn't the only issue in oil price news this week. Other countries are increasing oil production, and that could be a major problem for OPEC...

Oil prices have risen 13% since OPEC announced its deal on Nov. 30, but higher prices have encouraged oil producers in the United States to boost production.

The United States is the world's largest oil producer, and it's not a member of OPEC or cooperating with the cartel. And that's why American oil production is the biggest oil news story this week.

U.S. oil production has increased 3% since the start of the year and 6% since OPEC reached its deal in November.

That's why the Baker Hughes oil rig count has also been on the rise. 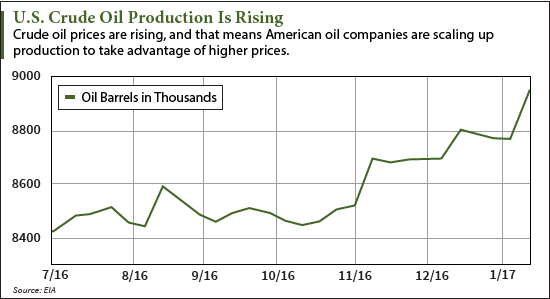 With American oil production increasing and American oil companies scaling up for more production, the OPEC deal might not be enough to keep oil prices rising. The recent news on American production is likely why oil prices have dipped even as OPEC's compliance meeting went smoothly over the weekend.