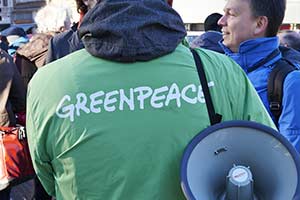 Greenpeace protestor at the Women's March on Washington, Jan. 21, 2017.

The trio's meeting at the White House was the most recent in a series of talks this week aimed at bolstering the U.S. manufacturing sector.

This morning, POTUS told the car company CEOs just how he intends to make manufacturing more accessible in their particular sector…

"I am, to a large extent, an environmentalist," Trump explained this a.m., according to Bloomberg. "I believe in it. But it's out of control."

Investors: Don't miss how this opportunity to make over $100,000 starting with a small amount of money… rolling stocks over and over again. Click here for this proven investing method…

The new POTUS did not go into detail about how and where he intends to scale back environmental regulations first. He simply said his administration will restore manufacturing jobs "big league," slash taxes "very substantially," and curb unnecessary regulations.

Trump likewise added that the United States will transform from "very inhospitable to extremely hospitable." He expressed confidence that America will go down in history as one of the friendliest nations in the world.

Mark Fields told reporters after the meeting this morning that the auto executives are encouraged by Trump's economic policies. That includes his executive action Monday to withdraw from the Trans-Pacific Partnership trade deal.

"We appreciate the president's courage to walk away from a bad trade deal," he said. "So I think as an industry, we're excited about working together with the president and his administration on tax policies, on regulation and on trade, to really create a renaissance in American manufacturing."

Money Morning Capital Wave Strategist Shah Gilani, who's an expert on the political implications of banking deregulation and how they affect average investors, recently offered his approach for such big bank rollbacks.