Before Snapchat stock is available to the public, the social media company will release its IPO offering price.

And because that price is cheaper than what retail investors will pay when the stock debuts, our readers have been asking us, "Can you buy shares in Snapchat now?"

Unfortunately, the answer is no.

Snapchat shares are not available now because the company has not officially filed for an IPO. But when the IPO does happen, which could be as early as March, retail investors will still not be able to purchase Snapchat stock at the IPO offering price.

We'll get to how retail investors can play Snapchat stock in just a bit.

But first, here's everything you need to know about the popular social media app before its goes public…

CEO Evan Spiegel describes Snapchat as a "camera company" that gives its users the ability to live in the moment.

Snapchat users can post pictures and videos with filters and animations. Users do have the option to share their posts for up to 24 hours, but standard posts disappear after 10 seconds.
And because of its unique features, Snapchat has attracted a large following of teens and millennials…

According to Bloomberg, 70% of 18- to 24-year-old U.S. smartphone users are on Snapchat. The company is also seeing growth from 25- to 34-year-old social media users.

Snapchat users are also very engaged with the app, spending an average of 10 minutes per day on it. In comparison, Instagram users only spend 6.4 minutes on the app per day, according to a study from investment company Cantor Fitzgerald.

Snapchat's lofty $25 billion valuation is mainly based on its projected revenue growth over the next several years. 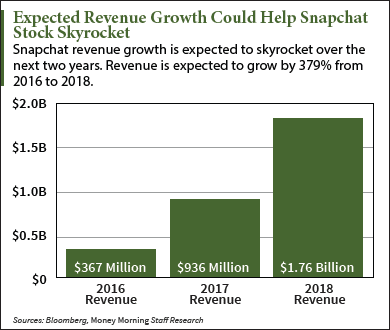 These revenue projections will have some investors racing out to buy Snapchat stock.

So when Snapchat goes public, this is how to play the Snapchat IPO…

18354 Reads
These 3 High-Yield REITs Pay 8%, 10%, and 12% Dividends
REITs produce gobs of cash from rent and other fees generated from properties including office buildings, storage units, multifamily units, and more.