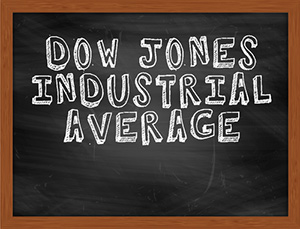 The Dow Jones Industrial Average today rallied above 20,000 thanks to a strong uptick in financial and healthcare stocks.

Banking stocks Goldman Sachs Group Inc. (NYSE: GS) and JPMorgan Chase & Co. (NYSE: JPM) have accounted for roughly 20% of the index's gains during the 42-day stretch. The markets also received a big boost from Boeing Co. (NYSE: BA), which registered gains over 4% after the company topped Wall Street earnings expectations before the bell.

The Dow Jones surged more than 155 points and crossed over the psychological barrier of Dow 20k for the first time in market history. Traders were cheering the historic milestone, and many on Wall Street were already pointing their eyes toward the next barrier: Dow 21,000.

This market milestone sent analysts, media sites, and investors into a celebratory frenzy. But there's an arguably more important market milestone on the horizon. One that could, and perhaps should, overshadow Dow Jones 20k.

Check out what it is, right here.

Crude oil prices were falling after the U.S. Energy Information Administration announced a larger than expected increase in U.S. oil inventories. U.S. stockpiles increased by 2.8 million barrels during the week ending Jan. 20. That figure was largely in line with a report by private trade group the American Petroleum Institute on Tuesday.

With the Brexit back in the news, UK Prime Minister Theresa May must now work with Parliament to enforce the people's will to depart the European Union. While May is expected to meet with President Trump on Thursday to talk about a bilateral trade deal, there is something very important happening in Europe regarding the energy industry. Money Morning Global Energy Specialist Dr. Kent Moors offers an important story on the shifting geopolitical landscape and power that is transferring out of London due to the Brexit. Find out what city is poised to benefit the most and what it means for global energy traders, right here.

But the big story is the standoff between President Donald Trump and Mexico.

President Trump issued an executive order that set the path for the construction of a border wall between the United States and Mexico. Trump also plans to enforce immigration laws and take aim at "sanctuary cities" that harbor undocumented immigrants. The actions come a day after Trump said he wants to renegotiate the North American Free Trade Agreement (NAFTA) with Mexico and Canada.

Mexico has issued stern warnings to President Trump about NAFTA talks. It is willing to "modernize" the agreement, but deal breakers include the wall, remittances, and a worse deal than the current one. With 80% of Mexico's exports coming to American markets, this trade deal is a very important issue for the Mexican economy.