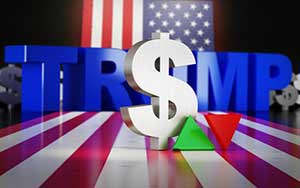 The Dow Jones Industrial Average today was ticking up as traders eye another busy round of earnings reports and more executive actions by President Donald Trump.

World stocks hit a 19-month high overnight thanks to strong European earnings reports, improved Japanese trade data, and expectations that Trump will unleash a wave of economic stimulus to pay for a large infrastructure project.

If you want to know more about how President Trump and his cabinet will affect your money, read our latest guide to his policies and their financial impact, right here.

On Tuesday, the Dow rallied by triple digits for the first time in three weeks and came within striking distance of the psychological barrier of 20,000 points. The markets moved higher on word of President Trump's latest efforts to deregulate the U.S. economy and positive earnings reports from companies like Alibaba Group Holding Ltd. (NYSE: BABA) and DuPont Co. (NYSE: DD).

The Dow Jones Industrial Average projected a 70-point gain, which puts the index back within striking distance of 20,000. A light economic calendar features a few data points on the U.S. housing market. Investors will parse through a number of earnings reports and focus their attention on the third day of Donald Trump's first week in office.

In economic news, rising mortgage rates have not deterred new homebuyers from purchasing real estate. In December, the number of new mortgage applications increased by 4%.

On the international front, investors are eyeing statements by British Prime Minister Theresa May. On Tuesday, Britain's Supreme Court ruled that May will require permission from the nation's Parliament before it can begin the process of exiting the European Union. May is expected to begin working with other leaders to start the Brexit process, which was originally slated for a "hard" departure by the spring.

Crude oil prices are ticking lower ahead of Wednesday's inventory report from the U.S. Energy Information Administration. Oil prices have jumped 15% since OPEC agreed to cut oil production in November, and that has lifted our top 2017 oil stocks to watch now. Click here.

But the big story is Donald Trump's continued use of executive orders.

Must See: Three Social Security Secrets the Government Doesn't Want You to Know

Shares of TransCanada Corp. USA (NYSE: TRP) added more than 3% Tuesday after President Trump signed an executive order to advance the Keystone XL Pipeline and the Dakota Access pipelines back into the hands of Congress.

The two pipelines had been disputed and delayed by the Obama administration. Shares of Energy Transfer Partners LP (NYSE: ETP), the operator of the Dakota Access projects, added 3.3%.

Here's why the pipeline stories are important and what they mean to your money.