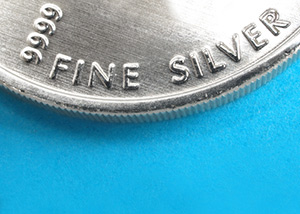 In today's (Wednesday) silver investment news, the price of silver is down 2% and trading at $16.85.

The decline in silver prices came after the Dow Jones Industrial Average crossed the 20,000 mark for the first time in history. Stock market rallies like this often lower the demand of safe havens like silver. Higher stock prices also attract people looking for more profitable investments than precious metals.

While rising stocks are pulling the price of silver lower today, there's another silver investment news story that points to a big price rally in 2017. And it's reiterating our bullish 2017 silver price predictions for the end of Q1 and end of Q2, which show gains of more than 30%.

The company in the news today is Fresnillo Plc. (LON: FRES). While this firm is mostly unknown to U.S. investors, it's a powerful player in the global silver market.

Don't Miss: The Best Way to Protect Your Money in 2017 – Free Report

But those weren't even the most important numbers from the report today. In fact, there's another set of numbers that supports Money Morning Resource Specialist Peter Krauth's predicted 30% surge in the silver price this year.

The company said it expects silver output to hit 58 million to 61 million ounces this year. That would be a 15.3% to 21.3% increase from the 50.3 million ounces last year. This second straight year of record output would mostly be due to the firm's new San Julián mining project.

As one of the global silver market's most dominant players, Fresnillo's plans for boosting output prove the company is bullish on the price of silver. It knows the silver price will be high enough to cover additional production costs and yield a big profit.

One of the biggest factors behind his forecast is the falling gold/silver ratio.

A lower gold/silver ratio is bullish for silver prices. That's because it indicates silver is undervalued compared to gold. And the ratio was constantly in the silver investment news last year because it saw a huge decline… 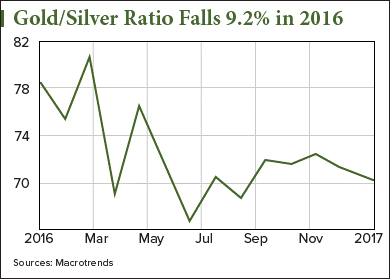 And Krauth says it's only going lower. He expects it to drop as low as 60 sometime this year.

"Since the precious metals bull market began about 15 years ago, the ratio has averaged about 60 overall," Krauth said. "I think we're likely to get much closer to that level in 2017, with the silver price catching up to gold."

Why will platinum rise above gold when a large new supply is coming on the market?