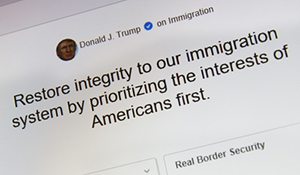 Despite concerns over protectionist policies by the president in recent days, the markets continue to rally on the hopes of corporate tax reform, income tax reform, and reduced regulatory burdens in the financial, energy, and agricultural sectors.

President Trump has delivered on his campaign promises so far, and it appears he's ready to take his battle with Mexico to the next level.

Gains were actually held back due to yesterday's government report that U.S. inventories had increased last week by a larger than expected amount. The Energy Information Administration said that crude stocks increased by 2.8 million barrels last week.

But the big news today is the fracture of relations between Mexico and the United States.

Since the onset of his pursuit of the White House, President Donald Trump has told Americans that he will build a wall between the two countries in order to stop undocumented migrants from coming into the United States. The total price tag is estimated to hover in the tens of billions of dollars. What's more, Trump has sworn that Mexico will pay for the wall.

"The U.S. has a 60-billion-dollar trade deficit with Mexico," Trump wrote. "It has been a one-sided deal from the beginning of NAFTA with massive numbers of jobs and companies lost. If Mexico is unwilling to pay for the badly needed wall, then it would be better to cancel the upcoming meeting."

The border wall could be a serious roadblock in the U.S.' ability to get Mexico to sit down and renegotiate NAFTA. But one thing is for sure: President Trump renegotiating NAFTA has become a major priority for the White House. So, how can Trump bring Mexico and Canada to the negotiating table? And more important, how would the new trade agreements impact your wallet? We answer both of those questions, right here.

I sold all my stocks except for one that i am waiting for the dividends on 2/13/17. i am putting all my money in the core account.
i am holding from purchasing anything. I stay home and am organizing all my finances and dont visit my favorite stores, macys, target and Marshalls.
I feel uneasy about the future and the new prsidency.