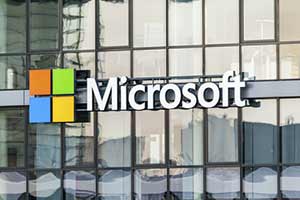 While earnings reports are coming in today, the market will also be moving on new economic data releases. The GDP growth was announced at 8:30 a.m. and was 1.9% for Q4 2016. Consumer confidence will be reported at 10:00 a.m., and the rig count will be announced at 1:00 p.m.

Microsoft stock is up almost 2% in pre-market trading after beating revenue and EPS estimates.

The company announced revenue of $25.8 billion and EPS of $0.84. Earnings per share were more than 10% higher than the estimated $0.71. Microsoft has beaten EPS estimates in three of the last four quarters.

Its fastest-growing unit is Office 365, Microsoft's cloud-based suite of productivity software. The unit saw 10% growth over the previous year.

Starbucks stock is down over 4% in pre-market trading after reducing its 2017 revenue forecast.

The company's earnings report was as expected. Revenue was $5.7 billion and EPS was $0.52 for the previous quarter.

Starbucks expected revenue growth of more than 10% for fiscal year 2017. The company lowered the forecast for 2017 to a target of 8% to 10% when earnings were announced.

United Rentals stock is up 11.2% after releasing its earnings report.

The company released its earnings report yesterday at 1 p.m. and beat analysts' expectations by more than 5%. URI announced EPS of $2.67, while analysts were expecting $2.24.

United Rentals is also acquiring NES Rentals Holdings Inc. The cash deal is worth $965 million and should close by the end of March. The announcement was made at the same time as the earnings report.