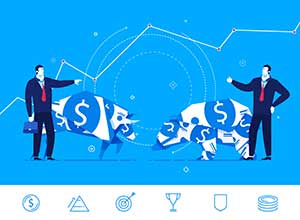 In Dow Jones news today, the index slipped below 20,000 as investors weighed President Trump's executive order on travel and immigration.

It was the largest one-day downturn since October before the 2016 election.

Investors are also turning their attention to tomorrow's meeting among members of the U.S. Federal Reserve. The CBOE Volatility Index – widely considered the markets' fear gauge – jumped over 12% on the day.

The Dow Jones fell 122 points, falling below 20,000 for the first time after investors parsed through mixed earnings and economic data. The U.S. Commerce Department reported an uptick in consumer spending in December. The 0.5% monthly uptick accompanied expectations for rising inflation in the year ahead.

With consumer spending on the rise, all eyes turn to tomorrow's first meeting of the Fed Open Market Committee in 2017. The U.S. central bank has suggested it will increase interest rates three times this year.

Money Morning Director of Tech & Venture Capital Research Michael A. Robinson weighed in on the top technology trends to buy into right now. Target No. 2 will surprise you.

Gold prices were showing slight gains due to growing geopolitical uncertainty in the United States and in Europe. Gold prices hovered just below $1,200 per ounce.

Crude oil prices were falling due to broader market uncertainty and news that U.S. oil production is still on the rise. On Friday, Baker Hughes Inc. (NYSE: BHI) announced that the number of domestic production rigs increased for the 12th week out of the last 13. Markets are also weighing news that OPEC producers may be struggling to fulfill 100% of their planned production cuts in order to help support crude prices.

Early figures indicate that the global oil cartel has cut roughly 900,000 barrels per day (bpd) over the first month of January. However, this figure implies that OPEC is still 25% short of its goals. Money Morning Global Energy Strategist Dr. Kent Moors offers his latest "inside scoop" on crude oil production, right here.

But the big stock market news today was President Donald Trump's executive order to curb immigration and travel over concerns regarding national security. Thousands of people have rallied in airports to protest the President Trump's policies.

In addition, a number of high-profile executives have spoken out against the executive order.

Goldman Sachs Group Inc. (NYSE: GS) CEO Lloyd Blankfein told his employees that the bank does not endorse or support the policy. Meanwhile, Starbucks Corp. (Nasdaq: SBUX) CEO Howard Schultz announced his company would hire 10,000 refugees in 75 countries over the next five years.