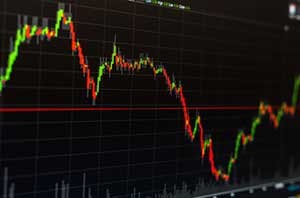 The Dow Jones news today is a projected decline in the index after Asian stocks fell and markets weighed an executive order by President Donald Trump placing travel restrictions on immigrants and refugees from seven nations.

The order led to the detention and deportation of hundreds of travelers arriving at U.S. airports over the weekend. The story has ignited a number of legal challenges and concerns about the constitutionality of Trump's executive order.

On Friday, the Dow slipped seven points on news that Q4 GDP growth cooled and earnings reports failed to perform up to Wall Street analyst expectations.

The Dow Jones industrial average projected a 45-point decline as investors weighed a controversial executive order by President Donald Trump and Friday's report from the U.S. Commerce Department that U.S. GDP in the fourth quarter fell below 2%.

Crude oil prices were falling on word of rising U.S. crude production. On Friday, Baker Hughes Inc. (NYSE: BHI) announced that the nation's oil and gas rig count increased by 15 platforms in the previous week. This was the 12th gain for U.S. producers in 13 weeks and brought the official rig count to 566. That is the highest number of U.S. platforms since November 2015.

In the energy sector, investors are keeping an eye on Chevron Corp. (NYSE: CVX) after the international oil giant reported a dismal fourth-quarter earnings report last week. Investors should consider looking for other profitable energy plays this year after the company fell well short of Wall Street earnings expectations. So, what oil stock should investors own instead?

While everyone has been paying close attention to oil prices, the real story is the investment opportunity after a monumental shift in our nation's energy policy. President Trump's recent executive order paves the way for the construction of the Keystone XL pipeline. More importantly, it paves the way for big profits for investors looking to capitalize on the massive energy infrastructure project. Here are the three best Keystone pipeline stocks to buy now.

But the big story is the executive order filed by President Donald Trump over the weekend that curbed immigration and ignited an immense amount of criticism both in the United States and from governments and human rights organizations around the globe. Trump's order placed a 120-day hold on allowing refugees into the country. The order also indefinitely bans refugees from Syria and places a 90-day ban on individuals traveling from Iran, Iraq, Libya, Somalia, Sudan, Syria, and Yemen.

Investors are concerned that Trump's "America First" policy could destabilize relationships between the United States and other nations abroad.

Act Now: For only the third time in 20 years, a metal more rare and more exotic than gold is about to make stock market history. And it's poised to make early investors a lot of money. Get the full story.