(Kitco News) – World stock markets were mostly weaker to start the new trading week Monday. U.S. stock indexes are pointed toward weaker openings when the New York day session begins.  The marketplace is still a bit nervous regarding actions the new U.S. president has taken or may take. Over the weekend President Trump banned immigration from several countries the new administration has deemed as sponsoring or harboring terrorists. Markets in China, Hong Kong and South Korea were closed Monday for the Lunar New Year holiday.

In overnight news, Euro zone January consumer confidence was reported at -4.7 versus -5.1 in December. The January reading was a bit better than expected.

The U.S. dollar index is firmer Monday morning, on a corrective bounce after hitting a six-week low last week. Recent selling pressure has produced technical clues the dollar index has put in a near-term market top.

The other key "outside market" on Monday sees Nymex crude oil prices trading firmer. The latest U.S. rig count shows U.S. shale oil production is on the rise, which is limiting the upside in crude oil. U.S. oil production is currently around 9 million barrels a day and rising. 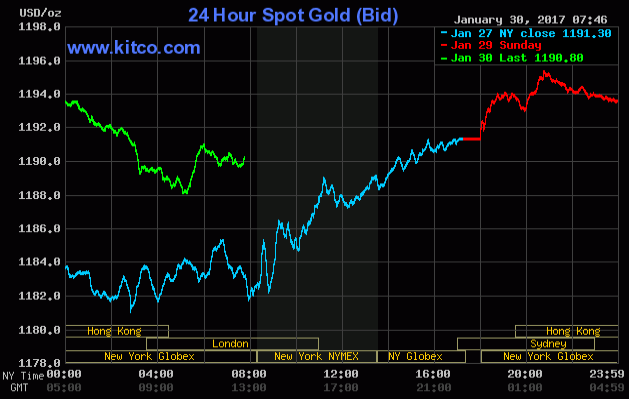 The Obama administration is responsible for identifying the countries as sponsoring or harboring terrorism!