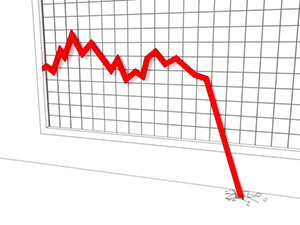 Investors are concerned over President Trump's immigration policies and what they mean for the global economy.

The S&P 500 was pummeled thanks to a poor earnings report from United Parcel Service Inc. (NYSE: UPS). Shares of UPS fell close to 7% after the company filed a quarterly loss and issued a weaker than expected 2017 profit forecast.

The Dow Jones retreated another 107 points and the CBOE Volatility Index roared close to 4% thanks to underwhelming earnings reports and lackluster economic data. A week after crossing the 20,000 barrier, sentiment is turning negative.

Investors will look to Apple Inc. (Nasdaq: AAPL) and Facebook Inc. (Nasdaq: FB) to provide a shot of optimism when the companies report earnings this week.

Gold prices hit a two-week high after President Trump demanded that U.S. pharmaceutical companies produce products in the United States. A senior adviser for President Trump also issued a statement on the valuation of other nations' currencies. Peter Navarro, the head of Trump's National Trade Council, said that Germany is using a "grossly undervalued" euro to gain competitive advantage against other exporting nations. Gold prices jumped 1.4% to nearly $1,215 per ounce. Money Morning Resource Specialist Peter Krauth just recommended that investors own some gold in 2017. That's because he projects an 18% gain for the yellow metal.

Crude oil prices were rising as U.S. production continues to offset deep cuts created by OPEC. At a time that OPEC is expected to cut roughly 1.8 million barrels per day (bpd), American producers have been increasing crude production at a breakneck pace since July 2016. Domestic production increased by 6.3% to nearly 9 million bpd, according to the U.S. Energy Information Administration.

Today, President Trump turned his attention to the U.S. pharmaceutical industry. During a meeting with pharmaceutical executives at the White House, Trump called on U.S. drug companies to manufacturer products in the United States and to reduce the cost of their products. Trump also said he was committed to reducing regulatory burdens in the industry to help the manufacturers bring products to market with less red tape.