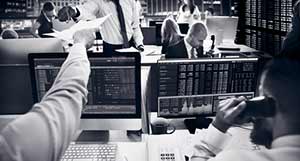 The Dow Jones news today is filled with earnings reports as the Dow slides ahead of trading.

The U.S. dollar is retreating and is off to its worst yearly start since 2009. With earnings season in focus, Money Morning Chief Research Analyst Sid Riggs explains a quick way how you can make money before the market opens Tuesday.

Global stocks continued to slide this morning as concerns about President Trump's executive order on travel and immigration from seven countries has weighed on investor sentiment. Concerns accelerated Tuesday after Trump fired acting Attorney General Sally Yates, a holdover Obama appointee, for "refusing to enforce" the executive order. Trump accused Yates of betraying her agency after she directed Justice Department employees to stand down and not enforce the order. Yates had said she didn't believe the travel ban was lawful.

On Monday, the Dow slipped below 20,000 as investors weighed President Trump's executive order and a busy day of earnings reports. It was the largest one-day downturn since October before the 2016 election.

The Dow Jones Industrial Average projected a 31-point decline ahead of a very busy day of earnings reports. Technology stocks are in focus as Apple Inc. (Nasdaq: AAPL) reports earnings today. Here's what you need to know about Apple's report.

The U.S. Federal Reserve kicks off its first two-day policy meeting of 2017. The central bank is expected to leave its benchmark interest rates unchanged. Investors will be speculating on statements by the Fed to determine the timing of the next rate hike. Fed Chair Janet Yellen and several other members of the Fed Open Market Committee have hinted that the central bank will raise interest rates up to three times this year.

Crude oil prices were mixed in pre-market hours as rising U.S. production continues to offset deep cuts created by OPEC. At a time that OPEC is expected to cut roughly 1.8 million barrels per day (bpd), American producers have been increasing crude production at a breakneck pace since July 2016. Domestic production increased by 6.3% to nearly 9 million bpd, according to the U.S. Energy Information Administration.

But the big story is Snap Inc., the owner of the popular messaging service Snapchat.

But how soon can investors buy Snapchat stock?

According to Recode, Snap Inc. plans to file for an Snapchat IPO at the end of this week. That means Snapchat stock could publicly trade as early as March.

Here's everything you need to know about the Snapchat IPO.