AAPL stock was trading at about $124.50 Tuesday evening after the company reported record quarterly revenue of $78.4 billion, beating expectations for sales of $77.44 billion.

Apple also beat on income. Earnings per share was $3.36, easily topping the consensus forecast for $3.23.

"It was a dynamite quarter," CEO Tim Cook told CNBC.

The impressive numbers were driven by a strong showing by the iPhone 7, which sold 78.3 million units. The forecast was for 77 million units.

Mac sales also eked out a 1% gain in unit sales, good for a 7% increase in revenue year over year.

The iPad remained a disappointment, with unit sales plunging 19% and revenue falling 22%.

But Apple's Services division performed well, with revenue increasing 18% over the same period a year ago.

The Apple Watch again remained hidden inside Apple's "Other" category. But the product did not appear to have a good quarter, as "Other" sales were down 8% year over year.

While the Apple stock price has been on a good run - shares are up about 34% since bottoming out at about $90 last May and 17.5% since the iPhone 7 was unveiled in early September - today's earnings will be a "sell on the news" event.

The AAPL stock price today was hovering around $121, right about where it's been for the past three weeks.

But if the forecasts are on target, these year-over-year numbers won't thrill anybody.

These Numbers Are Bad News for the Apple Stock Price Today

And Apple's share buyback program makes the earnings look better than they are. If you recalculate with the number of outstanding shares Apple had last year, the income estimates drop to below $3.10 a share.

Related: The Best Tech Stocks to Buy in 2017

Other than the headline numbers, Wall Street will focus on iPhone sales. The iPhone contributes about two-thirds of Apple's revenue and profits. 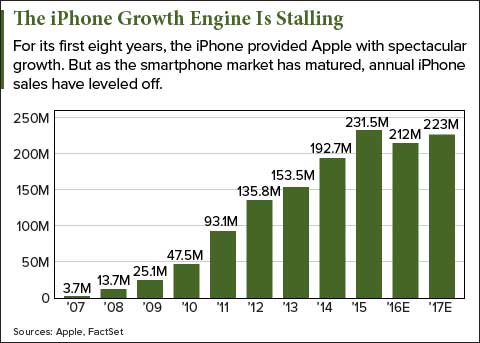 Apple will need to outsell the iPhone forecast by a huge margin to keep the Apple stock price from dropping.

The news gets gloomier. Expected year-over-year drops in several of the company's other main businesses will add to the pressure on the Apple stock price today.

Bright Spots to Be Scarce in the Apple Q1 2017 Earnings

Sales of the Apple Watch may remain a mystery unless Apple decides finally to break out these numbers rather than lump the product into the "other" category.

The FactSet projections have Apple Watch sales falling year over year, but this category could deliver a positive surprise. A clerk at a local Apple Store here in Maryland told me they couldn't keep the product in stock over the holidays.

If the company doesn't break out Apple Watch sales, keep an eye on the revenue for the "Other" category. The estimate is for sales of about $4 billion.

Apart from the Apple Watch, one other category has a good chance of giving Apple something to crow about: services.

Last year, services surpassed the Mac as Apple's second-largest source of revenue. Wall Street expects this category to grow 14% from $6.1 billion to $6.9 billion.

And while still dwarfed by the iPhone revenue, services revenue is the single best reason to buy AAPL stock on the dip that's likely to come in the wake of these earnings.

Why Apple Stock Is a Buy Despite Uninspiring Earnings