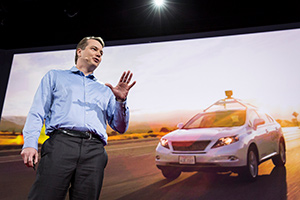 Four chief minds from this particularly innovative department, including two of its cofounders, left the company amid rumors of infighting about the time it would take to get their self-driving car product to market.

One of the biggest names to leave was former Chief Technology Officer Chris Urmson.

Urmson explained why he left in a vaguely worded Medium post later that month. "If I can find another project that turns into an obsession," he wrote, "and becomes something more, I will consider myself twice lucky."

Later in September 2016, Bloomberg offered a bit more clarity to the public about what Google's driverless car team had been spatting over. "Some employees wanted to pursue partial autonomy to get a product to market faster, while CEO Larry Page insisted on full autonomy," the outlet reported on Sept. 12.

Urmson in particular had been a fervid lobbyist on Google's behalf. He'd been pushing members of the Senate since July of last year on regulations that would allow fully self-driving cars access to public roads. These very automobiles would travel city streets and avenues without so much as a steering wheel or brake pedals.

It didn't take long for Urmson to find himself a new corporate home - one fully accepting of his innovative ideas and activist causes.

And in the wake of this merger, both Google and Tesla have come out to publicly accuse Anderson and Urmson of stealing ideas...

Tesla vs. the Self-Driving Car Startup