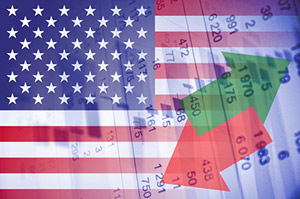 Another round of positive economic data showed increasing strength in the labor markets and the strongest manufacturing production growth in nearly two years.

The markets are still anticipating that the central bank will grow more hawkish in the year ahead. The central bank has said it plans to raise interest rates up to three times in 2017.

The central bank announced that overall sentiment in the economy has improved among consumers and business leaders. That said, the Fed did not choose to raise interest rates.

The markets were also cheering a round of positive economic that showed strength in the underlying economy. In labor news, the United States saw private payrolls increase by 246,000 in January, according to a report from ADP and Moody's Analytics. That figure easily topped the 145,000 new jobs expected by economists.

Crude oil prices climbed Wednesday on news that Russia and OPEC producers have followed through on their promises to cut excessive crude oil production. The cuts have been gradual, but global producers said they are making progress. The news was able to offset rising crude inventories in the United States. This morning, the Energy Information Administration reported U.S. crude inventories increased by 6.5 million barrels last week. That figure outpaced analyst expectations of a 3.3 million barrel build. Despite the uptick in crude stocks, the EIA said that inventories at Cushing, Okla. – the nation's primary delivery point – fell by 1.2 million barrels last week.

But the big news today was about Rex Tillerson.

This afternoon, the U.S. Senate confirmed Tillerson as the next secretary of state. In a vote that required a simple majority, Tillerson received 56 votes in his favor and 43 votes against his nomination. Tillerson has become the nation's 69th secretary of state just as a series of international concerns have emerged.

In fact, Tillerson's first assignment could be to address recent statements by European Union (EU) President Donald Tusk. Yesterday, Tusk released a letter to 27 of the economic bloc's leaders in which he considered the United States just as much of a threat to the EU as China, Russia, radical Islam, war, and terror. Read all about this controversial letter, right here.