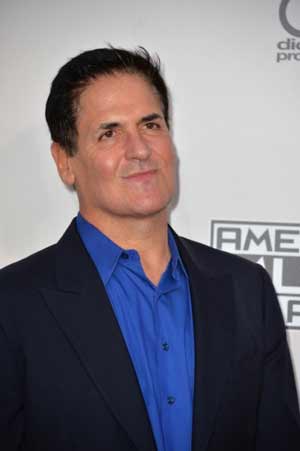 The ban, which was signed into effect via executive order last Friday (Jan. 27), indefinitely bars Syrian refugees from entering the United States and suspends all refugee admissions for 120 days.

Cuban, the billionaire creator of the show "Shark Tank," told MSNBC this morning that he's concerned the travel ban has already "changed the calculus of hiring and investing."

He then went on to caution the viewing public about how the executive action was "bad for business across the board"...

You see, Cuban did not previously have to consider whether a job candidate had a green card or dual citizenship in another country, he lamented this morning.

Cuban believes these new special considerations for companies in all sectors will incite undue stress, causing them to suffer both financially and in terms of morale.

The Dallas Mavericks owner's sentiment echoes that of his corporate peers, particularly in Silicon Valley.

Since the enactment of President Trump's travel ban, a slew of big-name CEOs and executives have come out to openly criticize his ruling. That includes the top exec from one household-name company that threatened just today to take Trump right to court...

Apple Inc. (Nasdaq: AAPL) CEO Tim Cook told The Wall Street Journal this morning that he intends to legally challenge the travel ban, though he did not specify how and when he'll go about doing so.

Cook added that he has contact with "very, very senior people in the White House" with whom he has been speaking about having the order overturned.

Lawsuits related to Trump's travel ban continue to pile up, though an exact count has not yet been tallied. Thus far into his presidency, however, the real estate mogul has accrued roughly 50 lawsuits against him in total.

Uncle Sam is about to implement another controversial plan - one that likewise threatens the retirement of millions of Americans...

The U.S. government will soon exploit an obscure loophole buried in Title 29 of the U.S. Labor Code to do it. If you have a 401(k), IRA, or any type of retirement account, this could cause you to miss out on $68,870 or more. Learn more...

It disappoints me that Cuban has turned into such a Libtard. All our President's executive order does is delay immigrants from selected countries until vetting mechanisms are improved. Trump is doing his job of protecting Americans. Cuban is nothing more than a crybaby.

Cuban is stupid. If he even remotely read the EO or wanted to know about it. He'd know that he was. This so called "ban" is not a ban. It only inconveniences those from there that go back and forth to the 7 countries. It does stop new approvals though. Bet Cuban has 5 or 6 new high level employees he's try to bring here from there that will effect his company. NOT!

My daughter is a Daughter of the Mayflower and has Native blood. She got the former from me and the later from her mom. If i fly to Denver from ONT, CA, we are inconvenienced and treated as potential terrorists. We are subjected to searches, limited to what we can carry and have to be x-rayed. Sorry that Cuban doesn't think really bad places as defined by President Obama shouldn't have to do the same.

So Trump wants to put a pause in new approvals so his team can evaluate and see if some adjustments might be needed is bad. Like I said, Cuban IS stupid.

Trump is a fool and full of pride…well my friend, you may not see your full term through…

40 years ago my son played travel hockey. Needless to say, we were stopped at the Canadien border many times and some were not pleasant at all. Being pulled over at customs and having all your luggage and skateing equipment gone through and having the car searched was very trying. We always traveled in a caravan so we all had to pull over and wait till they were finished with whoever they stopped. And that was Canada and we were hockey parents so I have no empithy for rich Mr. Cuban. Go Trump

I'm DougM and I approve of the first two comments !