Ever since President Trump proposed making "America energy independent," people have been asking "how much oil does the U.S. have?"

That's an increasingly important question now that OPEC has cut its oil production to drive up oil prices. This was OPEC's first oil production cut since 2008.

Now that oil prices are rising again, let's break down how much oil the United States has…

This Is How Much Oil the United States Has

The United States is one of the top three oil-producing countries in the world.

The U.S. was the world's leading oil producer through the first three months of 2016, but increased oil production from Saudi Arabia and Russia surpassed American production by the end of the year.

Check out how the United States ranks in the chart below comparing oil production by country. 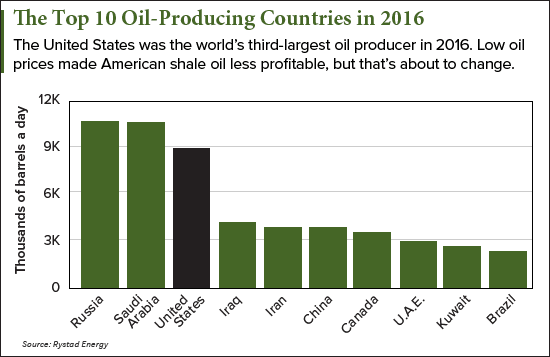 In 2016, the United States produced an average of 9.1 million barrels of oil a day. That was just under Russia and Saudi Arabia, which produced around 10.8 million each.

Fourth on the list is Iraq, which produced less than half of the American total, coming in at 4.3 million barrels a day.

Though the United States is one of the biggest oil producers in the world, its third-place ranking in the oil production comparison is the result of falling oil prices.

You see, according to the EIA, more than half of American oil production comes from shale oil. Shale oil is trapped inside of rock formations and is more difficult to extract than the traditional oil found in underground reservoirs.

That means oil prices have to rise to make shale oil profitable. And when it isn't profitable, American oil companies don't bother extracting it.

But now that oil prices are starting to rise again, American shale producers have started pumping more oil again. In fact, American oil production has risen 2.2% since the start of the year.

As Saudi Arabia and Russia both cut oil production as part of the OPEC agreement, the United States could once again become the world's leading oil producer.

But petroleum production by country is only one part of the answer. We also need to look at how much oil is in the ground.

Venezuela and Saudi Arabia have the largest proven oil reserves in the world, with 298 billion and 268 billion, respectively.

Even though Saudi Arabia has seven times the proven oil reserves of the United States, it's losing its oil war with the U.S.

U.S. Oil Production in 2017 Will Lead to Big Profits