Despite the price of gold today (Friday, Feb. 3) falling 0.1% to $1,218 this morning, the metal is about to cap off a big weekly gain thanks to the recent craziness in the White House.

In the second week with Donald Trump in the oval office, there's been no shortage of political events bringing instability and volatility to the markets.

And this is likely just the beginning.

The new president has already signed no less than 19 executive orders, impacting many aspects of Americans' and non-Americans' lives.

Perhaps the most controversial is the temporary ban on people entering the United States from one of seven majority-Muslim nations. This led to large protests, scores of people unexpectedly stuck in foreign and U.S. airports, and the firing of the acting attorney general for defying the travel ban.

Layered on top this were executive orders to build the Mexican border wall, rebuild the military, and reorganize the National and Homeland Security Councils.

Don't Miss: This Is the Best Gold Stock to Buy Right Now

Fears associated with ripped up trade agreements and mounting currency wars have ramped up. These fears are establishing ideal conditions for gold prices as investors seek gold as a safe-haven shelter.

Topping things off, the U.S. Federal Reserve chose to keep interest rates unchanged. Its comments on the economic outlook lacked clarity, but it did highlight rising price pressures.

All of this helped push the gold price to a two-and-a-half-month high, with the near term still looking quite bullish.

Here's why gold prices are up this week. Then, we'll give you our gold price prediction for 2017, which indicates more gains ahead...

On Monday, Jan. 30, the price of gold opened at $1,191 and climbed gradually through the day to close at $1,195 for a 0.3% gain. The price was lifted by weak global markets and news that President Trump had fired the acting attorney general for refusing to support his immigration ban. Air started coming out of stocks as the Dow Jones closed back below 20,000.

But the big gains came on Tuesday as the Trump effect kicked in even stronger. The new president talked down the U.S. dollar, saying a weaker currency would help U.S. trade with other nations. Indeed, the dollar has been on a clear downward trend since peaking at 103.82 in early January... 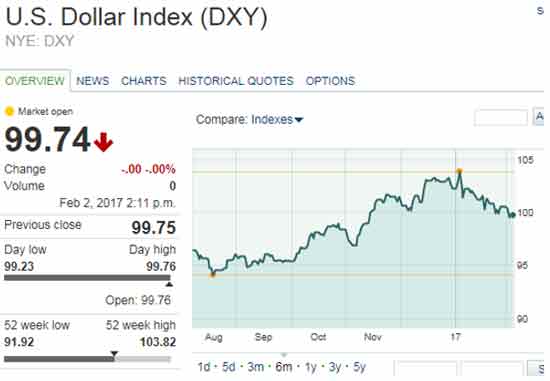 The wild political roller coaster continued on Thursday, pushing gold prices up to $1,225 before 9 a.m. It retreated from there as the dollar enjoyed a mild rally, but still managed to settle 0.7% higher at $1,219. This was the highest close for an active gold futures contract since Nov. 17.

Don't Miss: Your Free Guide to Making Money from Gold This Year

As Trump seems intent on continuing to shake things up, gold prices are poised to benefit from the volatility.

That's why we see gold hitting this price target by the end of the year...

Price of Gold Today Falls, but It'll Hit This Target by the End of 2017

The price of gold has nothing to do with Donald Trump. Do you really think people are that stupid. The price of gold is rising because as I am sure you know as well as the majority of people who read columns from your company. Would it have to do with the last 2 presidents and their establishments who took the richest country and put us 20 trillion dollars in debt. The other countries are in massive debt as well. The federal reserve printing out money to prop up the stock market and the banks, making our currency worthless. Inflation has been going out of control. Have you been to the supermarket to see what a hundred dollars buys etc etc. the financial institutions who were caught fixing the price of gold as well as silver. And the ban on the terrorists countries whether they be Muslim or whatever are because of this reason. They harbor people who want to kill people. You know like Fort Hood the California deal. Orlando. Paris. The colleges where attacks took place etc. Bengazi. Do any of those things ring a bell 911. I'm sorry to hear you don't value our safety above your political opinion. Please stick to financial facts not give us political ignorance. And in this case financial ignorance because the price of gold will continue to rise due to debt inflation interest rates and there is only so much of it along with a few other indicators. The world governments come back to gold and silver throughout history because of leaders and governments taking their country down the road of debt.