I'm a dyed-in-the-wool contrarian, but I admit putting your hard-earned money in a hated investment that's been falling for months – or even years – is easier said than done. It's a tough, counterintuitive step to take.

And yet, when it comes to nearly anything else, who among us can resist browsing the "sale" section for the best deal, or waiting to get a "Black Friday" discount?

The truth is, investing isn't different.

Contrarian investing is the purest expression of the "buy low, sell high" paradigm. It can net those brave enough to be "first in" some outsized long-term profits.

That's why I'm excited to show you an asset that couldn't be more hated right now; after a years-long struggle, it's at the "point of maximum disdain."

There are lots of reasons for the mainstream to "hate" an asset: It's too cheap, too risky, too common, not enough upside potential… the list is endless.

Uranium production is too expensive.

Currently, it costs more to produce a pound of uranium than it sells for. The shortfall is so bad, almost none of the uranium companies can turn a profit at spot prices. Uranium prices were off 40% last year, hitting a 12-year low under $18 per pound.

In fact, it was the worst-performing energy commodity of 2016.

The result is easy to predict. Worldwide uranium production has dropped off dramatically. A lack of profitability has caused some mines to either scale back production or shut down entirely.

Despite annual global consumption around 68,000 tonnes, the sector only produces some 50,000 tonnes.

…So far. That's not going to last, and I'll show you why.

And then there's the Trump factor…

The World Needs Nuclear in the Energy Mix

Trump is not just pro-energy, he's pro-nuclear. In early December, Bloomberg reported that Trump's advisors had:

"asked the Energy Department how it can help keep nuclear reactors 'operating as part of the nation's infrastructure' and what it could do to prevent the shutdown of plants. Advisers also asked the agency whether there were statutory restrictions in resuming work on Yucca Mountain, a proposed federal depository for nuclear waste in Nevada that was abandoned by the Obama administration."

Even some U.S. environmentalists are concerned that shuttering nuclear reactors, currently the biggest suppliers of zero-emission power, could dent efforts to fight climate change.

Germany, which often boasts about its leanings towards renewables, has become energy challenged. In recent months power from wind and solar has been dramatically insufficient, thanks to a dense fog over Central Europe.

What's more, since banning nuclear power in the wake of the Fukushima accident in 2011, Germany's carbon footprint has actually expanded.

According to Environmental Progress, a research and policy firm, California's carbon emissions have more than doubled since nuclear power generators were forcibly shut down early and plans for new facilities dropped.

Then, just a few weeks back, we got news that Kazakhstan, the world's largest uranium producer, would cut production by 10% in 2017 thanks to the slumping prices and inventory glut I mentioned. 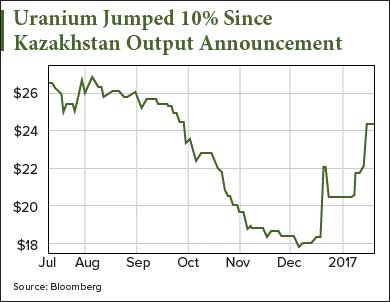 That caused the spot uranium price to surge by 10% to $24.25. It has since pulled back a bit, but is still up more than 25% from the lows it reached back in December.

Spot uranium remains below the average cost to produce it, but the move by Kazakhstan may well be the inflection point this market had needed to establish a bottom. 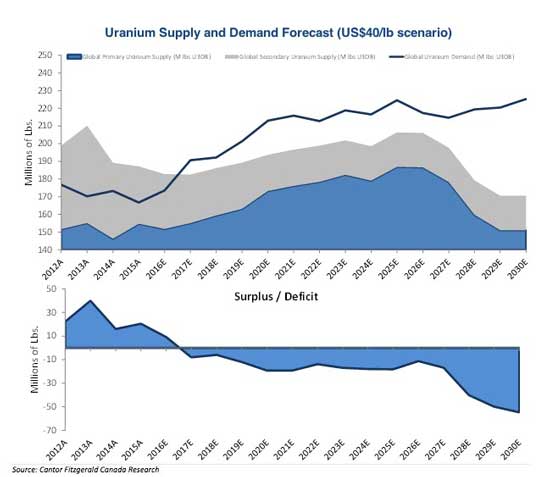 How to Play Uranium's Big Turnaround

Thank you for all the sage advise, in today's world of change and unrest it is comforting
to know that I can always rely on your steady guidance and voice of reason.

Though there is less uranium being produced than what is used, there is still a 10 year supply of the commodity. There is an absolute glut.

If you are investing in uranium, be wary of your stops.

Do not forget that ura trades at a premium of 35 percent to nav !!

I have had LIXXF in my portfolio for several months and it seems to hang around $1.65 per share. I am looking for it to break out soon.