I just read an article from a financial publisher who was hoping to capitalize on the popularity of today's Super Bowl.

The article was based on an indicator, first proposed back in the 1970s by a New York Times sportswriter, the late Leonard Koppett.

Now, most reasonable people understand that this is just a fun case of correlation without causation.

But not everyone is reasonable.

This writer, who's going to remain nameless here while he gets a thorough debunking, spent more than 700 words explaining "why the Super Bowl Indicator actually works."

But first, I'm going to show you why this kind of nonsense keeps showing up in the media – even the financial press…

At the core of human nature is the desire to understand complex systems in simple terms.

The problem is this: We tend to apply this simplistic cause-and-effect model to very intricate problems… and expect similar "easy-to-understand" answers.

One good example is Groundhog Day.

Like the financial markets, weather systems are complex and difficult to predict. But we have devised many simplistic ways to predict the weather, including the infamous groundhog, Punxsutawney Phil. If he sees his shadow on Feb. 2, there will be six more weeks of winter weather.

On Thursday, he saw his shadow – so we should hunker down for more winter weather, right?

Statistically speaking, Punxsutawney Phil has been right only 39% of the time dating back over the last 121 years, according to Stormfax Almanac.

But because we like simple explanations, we are more than willing to believe cause-and-effect explanations that really don't make logical sense.

Maybe that's why there are so many stock forecasting tools that use fuzzy logic and even fuzzier statistics to predict what will happen in the market in the days and months to come.

And so it is with 100% certainty that I can debunk any inkling that the Super Bowl Indicator actually works.

No, Really. It Doesn't Work…

Proponents will tell us that it has worked 40 out of the last 50 years. And the author of the above mentioned article says that it works because when an NFC team wins, it means that "manufacturing economy" cities are spending more on their teams, and when an AFC team wins, it means "newer service and technology" economy cities are spending more money on their teams.

I really don't have time to go into the length of the talent cycle in the NFL (how long it takes money spent on superior talent to show up in the win column) – or even to mention how the NFC versus AFC is no longer rust belt versus new tech economies.

Let's just stop and say that good market and statistical analysis matters. Indicators that try to shoehorn explanations into strange market correlations are for your next cocktail party, not your portfolio.

Here's What Does Matter…

So let's look at what does matter. The markets have broken above the sideways box that dominated trading from early in December until late in January. Here's what that looks like on a chart: 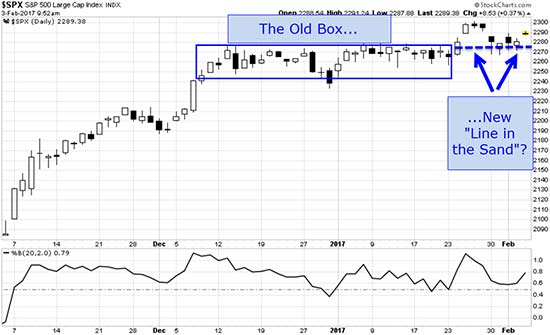 And this brings us to… another market indecision point.

Significantly, even though the market has broken to new all-time highs, we haven't been able to move even 1% above the Jan. 6 high-water mark.

However, the bears have not been able to drag the action even back down as far the Old Box, let alone below those levels.

And so the same narrative applies and pullbacks are to be bought until further notice.