With six catalysts driving the gold price forecast, the yellow metal should easily eclipse its all-time high of $1,895 within the next few years.

While one or two strong catalysts can be enough to drive an investment higher, multiple catalysts increase the likelihood of truly monster gains.

"The more catalysts you have, the bigger bang for the buck," said Money Morning Executive Editor William Patalon, III.

While global turmoil never recedes completely, threats to world peace have been on the rise lately. Conflict breeds uncertainty in the markets, which historically has pushed gold prices higher. 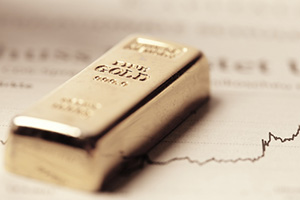 Russia, under President Vladimir Putin, has shown a willingness to challenge the world's democracies any way it can, from its annexation of the Crimean peninsula in 2014 to its alliance with Syrian President Bashar al-Assad to its attempts to influence last year's U.S. elections.

Both North Korea and Iran have threatened the United States outright. China has become increasingly belligerent in regard to its territorial claims in the South China Sea.

Each of these flashpoints now has the added uncertainty of President Donald Trump, who in his first two weeks in office has managed to touch off numerous diplomatic firestorms.

With the U.S. stock markets hovering near all-time highs, investors will be reluctant to keep shoveling more money there. Foreign markets are even less inviting.

Emerging markets remain at risk to a strong U.S. dollar. European stocks face uncertainty from Brexit as well as lingering concerns about the multination debt crisis, especially in Greece. Corrupt governments and a lingering recession plague the major Latin American economies. The economy in China is slowing, and the yuan continues to weaken.

Getting respectable returns from stocks will be tough for the foreseeable future.

And things look worse for the bond market...

Nearly 10 years of low interest rates made bonds attractive, particularly for investors seeking to minimize risk. But now bond yields are starting to rise again, which means prices are falling.

This epic shift was most obvious in the wake of Donald Trump's presidential election victory. In the two days following the election, the global bond market surrendered more than $1 trillion.

"Bonds will be a bad place to be," Patalon said.

When it becomes clear the safe haven bonds have provided for the past decade is no more, investors will look to gold.

Inflation hasn't been a concern in the United States since just before the 2008 financial crisis. In fact, the U.S. Federal Reserve has spent most of the past decade worried that inflation is too low.

But that's changing now. And inflation by definition will cause gold prices to rise.

Inflation rises as the economy begins to prosper. Kiplinger's latest forecasts for the U.S. economy have annual growth stabilizing at about 2% this year then rising to 2.5% to 3% in 2018 and 2019 - better than it's been since before the Great Recession.

And President Trump's economic policies will feed this trend. His proposal for up to $1 trillion in infrastructure spending will help stimulate the U.S. economy - and ignite inflation.

Of course, as inflation rises, the U.S. Federal Reserve will be compelled to raise interest rates.