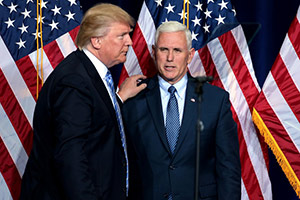 "Repealing and replacing Obamacare" was a chief talking point of President Trump's campaign.

President Donald Trump's election was supposed to have solidified the ultimate demise of the Affordable Care Act (ACA), better known as Obamacare.

After all, overturning former President Barack Obama's legacy healthcare law was a major talking point for Trump during his presidential campaign. It's also been a long-held mission for the majority of GOP Congress members to boot.

But a growing number of House Republicans have recently shifted their "repeal Obamacare" rhetoric to "repair Obamacare" instead.

It started on Feb. 1 when Bloomberg reported that conservative pollster Frank Luntz told Republicans at a Philadelphia summit that the "repair" language was more "amenable to Americans." He said to use it instead of "repeal and replace."

Luntz's message seems to have made a strong impact.

On Feb. 2, Sen. Lamar Alexander (R-TN), the chair of the Senate Health Committee, said, "I think it is more accurate to say 'repair Obamacare' because, for example, in the reconciliation procedure that we have in the Senate, we can't repeal all of Obamacare," according to The Washington Post.

Alexander likened the current state of the Affordable Care Act to a collapsing bridge.

"You send in a rescue team and you go to work to repair it so that nobody else is hurt by it and you start to build a new bridge, and only when that new bridge is complete, people can drive safely across it, do you close the old bridge."

Also on Feb. 2, Sen. Orrin Hatch (R-UT), the head of the Senate Finance Committee, told CNN that the GOP wanted to "try and repair the law."

This overall switch in rhetoric has sent many analysts, investors, and hopeful ACA-repeal acolytes reeling, wondering where it came from.

House Speaker Paul Ryan, a Wisconsin Republican, tried to "clean up the mess" on "FOX & Friends" last Thursday (Feb. 3). Ryan said there had been a "miscommunication" between GOP party members.

"To repair the American healthcare system, you have to repeal and replace this law, and that's what we're doing," Ryan said.

But it seems GOP legislators are indeed grappling with their party's desire - and President Donald Trump's promise - to dismantle Obamacare with what might be a more pragmatic and cost-effective alternative: repairing it.

Here are the reasons that could help explain the Republicans' change in tone and timing on the contentious Obama-era healthcare act...