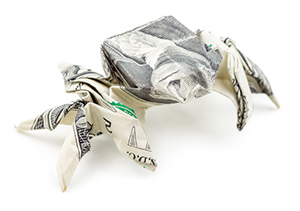 As the news of POTUS' twilight inquiry surfaced in the media, beginning first with The Huffington Post, Trump's critics were quick with their derision:

Regardless of whether or not Trump's earnest inquiry was indicative of economic ignorance on his part, his question indeed made an impact on those who read about it...

Google search volume for the question "is a strong dollar good or bad?" jumped from roughly 876,000 searches on Monday (Feb. 6) to over 2.2 million today.

Here is the answer everyone, including POTUS, is looking for...

Is a Strong Dollar Good or Bad?

You see, a strong U.S. dollar is the main reason that prices for commodities like oil, copper, and aluminum fall. Because commodities are priced in dollars, a more valuable dollar buys more of them for less dollar output. This is a disappointing (albeit usually temporary) setback for commodity investors, as the worth of their varying investments decreases.

Must Read: Know Exactly What to Buy, What to Sell, and How to Protect Your Money in 2017

A strong U.S. dollar can also hurt the earnings of U.S. corporations with significant overseas businesses. That's because a strong U.S. dollar makes U.S. exports more expensive, especially when paired against the price of exports in foreign currencies.

You see, if the greenback strengthens against another currency, then goods and services in the United States become more expensive for people using those other currencies outside the States. Therefore, consumers overseas might buy fewer American-made goods going forward, opting instead for cheaper products made elsewhere, which is then bad for American producers.

In the past, President Trump has expressed his concerns about a strong dollar in relation to the sale of American products in foreign markets. On Jan. 17, he told The Wall Street Journal that a hearty greenback was effectively "killing" the U.S. economy...