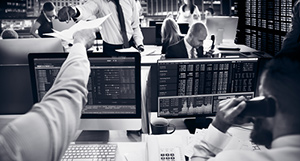 The stock market news today is highlighted by a triple-digit jump in the Dow, while the S&P 500 and the Nasdaq both touched record highs. The markets continued to beat back geopolitical concerns in Europe, and investors focused on the economic policies of President Donald Trump.

During a meeting with airline executives, Trump promised he would soon make a "big league" announcement about U.S. taxes within the next few weeks.

"Lowering the overall tax burden on American business is big league. We're way ahead of schedule, I believe," Trump said. "And we're going to announce something, I would say over the next two or three weeks, that will be phenomenal in terms of tax."

The Dow Jones added another 117 points after President Trump promised to make an announcement on tax reform and investors pushed stocks to record highs.

Shares of Goldman Sachs Group Inc. (NYSE: GS) added 1.5% and contributed the most to the Dow's gains. Shares of Viacom Inc. (Nasdaq: VIAB) offered the biggest boost to the S&P 500 after the company topped Wall Street earnings expectations. Shares of VIAB stock added more than 4% on the day.

Nine of 10 major S&P 500 sectors were in the green Thursday. Only utility stocks slumped on the day. The CBOE Volatility Index (VIX) - widely considered the markets' fear gauge - fell nearly 6%.

In economic news, U.S. jobless claims fell to a near 43-year low, according to the U.S. Labor Department. The agency announced the number of Americans seeking jobless benefits last week dropped to 233,000. That figure was below the 250,000 expected by economists and provides another boost to the U.S. labor market.

The U.S. Federal Reserve was back in focus today after St. Louis Fed Bank President James Bullard spoke on monetary policy at Washington University. Bullard said that interest rates could remain low throughout the year. He argued that it isn't clear whether President Trump's planned economic policies will go into effect and push inflation or economic growth higher.

But the big news was the ongoing legal battles between President Trump and the judicial branch. A little more than a week after a federal judge struck down Trump's temporary travel ban from seven predominantly Muslim nations, a judge in Texas has struck down another one of the president's executive orders.

Chief Judge Barbara Lynn for the U.S. District Court for the Northern District of Texas ruled to uphold the so-called "fiduciary rule," an Obama-era regulation that is designed to reduce conflicts of interest when financial brokers provide retirement advice to clients. Trump had ordered the Labor Department to review the rule before its implementation on April 10.

The new standard applies to financial advisors of retirement accounts, including individual accounts, and mandates that they always act in the best interest of their clients.

Here's what you need to know about what happens next.