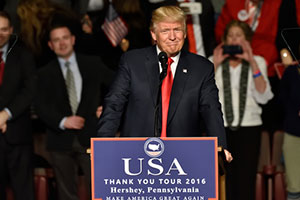 DJIA futures were pushing higher as investors reignited the "Trump Trade" and placed increased optimism in the president's planned economic policies. President Trump has promised to introduce a "phenomenal" tax plan in the coming weeks. The S&P 500 is now up 8.3% since Trump won the election in November.

On the global front, it looks like Greece is on the verge of yet another bailout deal. On Saturday, Greek Prime Minister Alexis Tsipras demanded that international leaders avoid adding new austerity burdens on the nation. Tsipras' warning came the same day that European Commission President Jean-Claude Juncker warned that any bailout deal was still on "shaky ground" because the International Monetary Fund has not fully assessed the situation and stated what its role will be through the process.

On Friday, the Dow Jones hit another record high as markets cheered statements by President Donald Trump on his plans to reform corporate taxes.

The Dow Jones Industrial Average projected a 47-point gain at opening bell. The markets continue to push higher as traders prepare for another busy day of earnings reports.

Automotive companies are in focus after the chief executives of 18 manufacturers sent a letter to President Trump and urged his administration to review Obama-era fuel efficiency rules. The letter specifically targets mandates set by the Obama administration on fuel efficiency for 2025. The CEOs warned that thousands of American jobs could be at risk should efficiency rules be raised to an average of 50 miles per gallon for vehicles manufactured between 2022 and 2025.

The U.S. Federal Reserve is back in focus after the central bank's Vice Chair Stanley Fischer spoke over the weekend. In a speech at the Warwick Economics Summit, Fischer warned about significant uncertainty under the Trump administration. Fischer said that the central bank remains committed to its goals of full employment and its target rate of 2% inflation; however, he said he wasn't clear about the president's efforts to repeal the Dodd-Frank Act or if there would be changes to the amount of capital that banks will be required to hold in the future.

Crude oil prices were sliding as markets focus on rising production in the United States and temporarily ignore OPEC members' efforts to comply with a massive deal to cap excessive global production. Last week, the International Energy Agency announced that OPEC countries were 90% compliant in their cuts in January. That is far greater than the 60% compliance level from its 2009 production deal.

Improving optimism about OPEC's future goals offset worries that U.S. production continues to swell. On Friday, Baker Hughes Inc. (NYSE: BHI) announced that the official U.S. rig count increased by eight oil platforms. With 591 rigs in operation, the United States has not seen this much oil production activity since October 2015.

But the big story is President Trump's battle against the retail sector.

Last week, President Trump lashed out at Nordstrom Inc. (NYSE: JWN) after the retailer announced it was dropping Ivanka Trump's clothing line from its locations.

Don't Miss: The 2017 Stock Market Outlook You  Won't Get Anywhere Else

Now, more retail companies are joining and dropping products that carry the Trump name. Over the weekend, Sears Holdings Corp. (Nasdaq: SHLD) and its subsidiary Kmart announced that they will end online sales of 31 different items from the Trump Home collection. These items include furniture and lighting products.

Sears joins Neiman Marcus, Nordstrom, and Belk as an aggressive customer campaign has called for a total boycott on the Trump brand.

It has been a great ride having the support provided by Money Map Press.