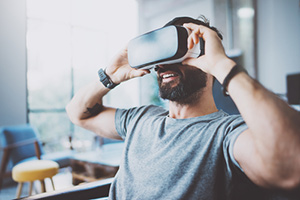 Right now, forward-looking investors are eyeing virtual reality stocks because of the massive profit potential in the industry.

But finding the best virtual reality stocks to buy now isn't easy. From chipmakers to headsets, there are a lot of ways to invest in VR.

Oculus Rift is mainly used for gaming right now. In "Surgeon Simulator," you can virtually operate on a patient. In "Arizona Sunshine," you can fight off a zombie horde.

Zuckerberg believes the technology could be used at sporting events, in schools, and in hospitals. He could also use the technology to create VR experiences through Facebook.

Instead of just sharing pictures and videos with friends, Facebook users could eventually be in the "same room" as their friends through VR. Zuckerberg could then have advertisers pay to "sponsor" the experience with product placements within the virtual world.

Microsoft's HoloLens isn't commercially available, but developers can pay $3,000 for the Development Edition.

When Microsoft does release a commercial version of HoloLens, it can integrate its Xbox gaming console with VR technology.

But like Zuckerberg, Microsoft has grander ambitions for VR technology than just gaming...

According to its website, the software maker is developing "mixed reality" experiences with the HoloLens. In mixed reality, objects, places, and people from the virtual and physical worlds merge together.

For example, Volvo was one of the first companies to partner with Microsoft to test the HoloLens.

The car shopping experience right now is very basic, as potential customers can only look at pictures, read reviews, or visit dealerships.

But Volvo is betting that will change...

But as we mentioned, investing in companies that make headsets isn't the only way to profit from VR technology.

Here are two other ways to play the growing and lucrative VR market...