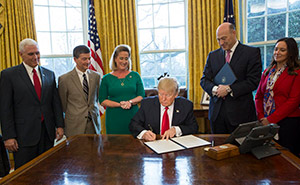 The rule comes from the Congressional Review Act, which allows Congress to overturn recently made rules by the executive branch. The Obama administration finalized the disclosure rule for oil companies in June 2016.

"It's a big deal," President Trump said as he signed the law.

We think so, too, especially for oil stocks. Before we get into what this means for oil stocks and your investments, here's a closer look at the Trump transparency rule…

What the Trump Transparency Rule Means

The Dodd-Frank law passed in 2010 contained a provision directing the Securities and Exchange Commission to issue new rules. Specifically, the SEC was directed to create a rule requiring oil, gas, and mineral companies to publicly disclose any payments made to foreign governments.

According to the SEC, the oil company transparency rule was designed to fight corruption in resource-rich countries, where governments accept bribes from corporations before allowing access to their natural resources.

The Dodd-Frank rule was meant to weaken this "resource curse."

But critics argued the financial disclosure rule made American oil and gas companies less competitive. The lobbying organizations for the oil and gas industry were vocal about their disagreements.

"The SEC's rule forces U.S. companies to disclose propriety information to competitors while foreign entities do not," said Stephen Comstock, the director of tax policy for the American Petroleum Institute, during a June interview.

That means an oil giant like Saudi Aramco wouldn't be required to disclose any foreign payments, while American oil companies would.

By getting rid of the rule, American oil companies won't have to disclose these payments any longer.

But here at Money Morning, we're more interested in what Trump's transparency rule means for your investments.

How to Profit from President Trump's Energy Policies