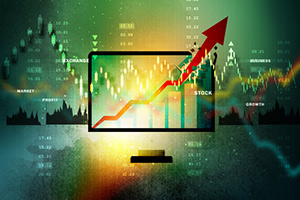 Today's stock market news is highlighted by the Dow pushing into record territory as investors prepare for a busy day of earnings reports, another round of economic data, and testimony before the House of Representatives by U.S. Federal Reserve Chair Janet Yellen.

On Tuesday, the Dow Jones jumped another 92 points thanks to a strong performance by banking stocks and Apple Inc. (Nasdaq: AAPL), which hit a new all-time intraday record.

The Dow Jones Industrial Average projected a 19-point gain and signaled that the markets were on the verge of another record day. A busy day of earnings reports accompanies testimony by Fed Chair Janet Yellen before the House Financial Services Committee.

Yesterday, Yellen appeared before the Senate Finance Committee and offered insight on the central bank's monetary policy positions. During her testimony, Yellen said that the central bank would likely need to increase interest rates at an upcoming meeting of the Fed Open Market Committee.

Prediction: Gold Prices Could Soar to $5,236 an Ounce

According to CME Group's FedWatch Tool, the markets only foresee a 17.7% probability that the central bank will raise interest rates during its meeting on March 15. Given that several members of the Fed are set to speak today (including Yellen), the odds could change.

Shares of Apple Inc. (Nasdaq: AAPL) are pushing even higher into record territory on news that Berkshire Hathaway Inc. (NYSE: BRK.A) has boosted its stake by sevenfold in the global technology giant. Warren Buffett's company reported the big position in a regulatory filing for the fourth quarter.

In recent trading sessions, crude prices have been rising on news that OPEC has established 90% compliance in its deal to reduce global crude output by 1.8 million barrels.

But today investors are eyeing a key inventory report from the Energy Information Administration and expecting a strong uptick in U.S. crude stocks. Yesterday, the American Petroleum Institute announced that domestic inventories increased by 9.9 million barrels, a figure that far outpaced analyst expectations. Consensus expectations call for the EIA to report a rise of 3.5 million barrels. It would be the sixth consecutive week of gains for U.S. inventory levels.

Forward-looking investors are eyeing virtual reality stocks because of the massive profit potential in the industry.

The virtual reality (VR) market is expected to grow from $1.37 billion in 2015 to $33.9 billion by 2022, according to MarketsandMarkets. So, setting your positions now will make you a lot of money if you know the right stocks to buy.

Right now, investors will want to own Facebook Inc. (Nasdaq: FB) and Microsoft Corp. (Nasdaq: MSFT) if they are serious about the long-term outlook for the sector.

But we've dug up two of the most intriguing virtual reality stocks to own in 2017.

An $80 Billion Cover-Up? Under the watchful eye of Congress, the government will soon be implementing a controversial plan that threatens the retirement of millions of Americans. And they're using an obscure loophole buried in Title 29 of the US Labor Code to do it. If you have a 401(k), IRA, or any type of retirement account, this could cause you to miss out on $68,870 or more. Learn more…