Most of the "Warren Buffett buys Apple stock" stories this week have reflected a sense of surprise that the world's most famous value investor nearly quadrupled his holdings in the tech icon in the last three months of 2016. 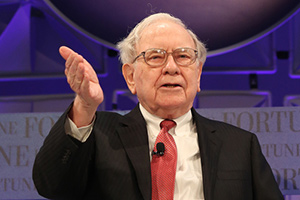 But the answer is actually simple. Apple is a household name, a well-run company, a company he understands, and the stock is trading at a reasonable price.

With the Apple stock price at about $135, Berkshire's stake is worth nearly $7.75 billion. Berkshire is now among AAPL's 10 largest investors.

Wall Street was taken aback at first because Buffett historically has shunned large stakes in companies that disrupt industries, and tech companies in particular.

When you take a closer look at Apple, you realize that it's evolved into a company that fulfills virtually all of Buffett's investing criteria...

Warren Buffett Buys Apple Stock Because It's a Perfect Fit

Five years ago, Apple was still a high-flying growth stock. But the company's tremendous size - it has the largest market capitalization in the world, more than $700 billion - and the maturation of its key business, the iPhone, have transformed AAPL into more of a value stock.

And when you consider the things Warren Buffett looks for in a target stock, Apple is a surprisingly good match.

Even non-investors recognize the companies in Buffett's portfolio - and that's the point. He knows that a powerful brand name helps a company retain market share and future earnings.

Apple has one of the most recognized brands in the world, often ranking first in lists of brand value. Everywhere you go, you see people holding their iPhones.

In fact, Apple products are as common as the products by such Berkshire holdings such as The Kraft Heinz Co. (NYSE: KHC) or General Motors Co. (NYSE: GM).

Warren Buffett Principle No. 2: Buy What You Understand

This rule is why Buffett has for the most part avoided tech stocks. But Apple products are used by almost everyone now, from children to senior citizens. It's not just Apple, of course. It's hard to find an American that doesn't own some sort of smartphone or PC.

Apple, in many respects, is now a consumer staple stock.

Think about it. At one time, autos and air travel both could have been considered "tech stocks" - a notion that seems absurd today. (Buffett likes them as well, having stakes in one automaker and four airlines.)

The actual wording of this Buffett rule says a target company should be "operated by honest and competent people."

Apple has a great track record in that regard. Most of the top management team has been on board since the early days of Apple's revival in the late 1990s. It's a very stable, talented group that does its best to carry on in the tradition of its late great visionary, Steve Jobs.

Apple stock is trading near an all-time high now, but back in October and November when Buffett was buying, AAPL was trading between $106 and $118. Its price/earnings ratio was under 14, well under the Standard & Poor 500 average of just over 20.

With sales of the iPhone 6s models disappointing Wall Street, sentiment on AAPL was decidedly negative. Apple stock wasn't going to crash, but last fall it could be had at something of a discount.

But here's why we think Warren Buffett decided to back up the truck...