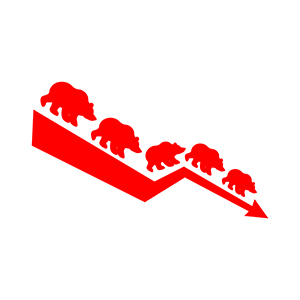 In Dow Jones news today, the Dow couldn't maintain its positive momentum after breaching the 20,600 mark.

Once again, President Trump dominated the headlines. The president held a press conference that covered his new nominee to lead the U.S. Labor Department, ongoing relations between the United States and Russia, and multiple rounds of his contempt for the mainstream media.

But the story that went under the radar was coming out of Europe.

During a recent hearing at the European Parliament, European Central Bank President Mario Draghi claimed that President Trump's economic policies could cause another financial crisis.

Here is Draghi's stunning statement and what it means for your money right now.

The Dow Jones was down for most of the day. By the end of the trading day, it climbed just seven points. Banking and energy stocks finally lost steam as investors turned their attention away from President Donald Trump's regulatory efforts. Shares of Wells Fargo & Co. (NYSE: WFC) led the banking downturn and fell close to 1% after it received a stock downgrade from European investment bank Credit Suisse Group AG (NYSE ADR: CS).

Silver prices continued to climb, and gold prices added another 0.5% on the day. While investors have been cheering the record-toppling gains in the Dow and Nasdaq, the recent rally in silver prices has failed to make front-page news. As we predicted just a few weeks ago, silver prices are at the onset of a big rally in 2017. As Money Morning Resource Specialist Peter Krauth explains, there's still time to get in on this rally.

Crude oil prices were mixed as investors weighed the positives of OPEC's continued efforts to curb excessive supply against new data showing U.S. crude production and inventories are on the rise. OPEC's deal that took effect on Jan. 1 has produced very positive results. Investors are now even speculating that the global oil cartel could extend production cuts beyond the planned target of 1.8 million barrels per day (bpd). While that story has traders cheering, the prospect of higher U.S. production has been supported by rising domestic rig counts and massive inventory jumps.

But the big news today is the Snapchat IPO.

Though the Snapchat IPO date has not been set, the company foresees a valuation between $19.5 billion and $22.2 billion. The firm will price shares between $14 and $16, according to a new regulatory filing released today.

Must Read: Virtual Reality Stocks: A Beginner's Guide to This $33.98 Billion Market

On the Snapchat IPO date, Money Morning Director of Tech & Venture Capital Research Michael A. Robinson has a way investors can maximize their profits and limit their risk.

Here's your free Snapchat stock guide and how to play the Snapchat IPO date, right here.