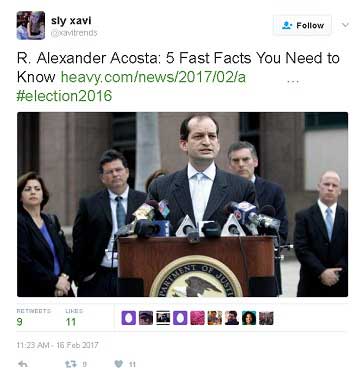 Just who is Alexander Acosta?

Who Is Alexander Acosta?

Acosta is a former U.S. attorney and current dean of Florida International University College of Law.

Prior to becoming the dean at FIU, Acosta served as South Florida's top federal prosecutor during the second term of former President George W. Bush's administration. Then he joined FIU's faculty in 2009.

Not only does Acosta boast "stellar conservative credentials," but he is also "recognized as a political pragmatist," reported The Miami Herald this morning.

Must Read: How President Trump's Cabinet Will Affect Your Money

CNN's Ana Navarro piled on her praise of Acosta this morning as well. 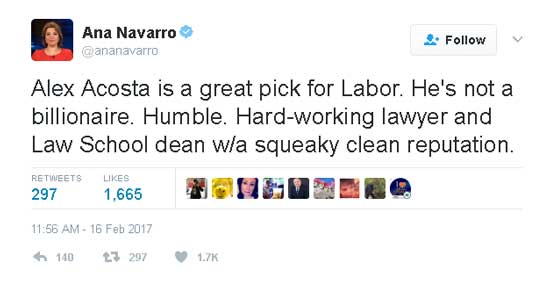 But contrary to the "squeaky clean" label Navarro foisted upon Acosta today, his professional career was not without controversy…

Under Bush's tenure as president, Acosta filed an unsolicited brief to an Ohio judge in 2004, urging the judge to allow Republicans the right to challenge the registrations of about 23,000 mostly African-American voters.

NPR also reported this morning that while Acosta was an active U.S. attorney, his office was reprimanded by a federal judge after it was revealed that prosecutors there had illegally recorded conversations with the attorney of a doctor accused of illegally prescribing painkillers. Acosta said he had instructed his employees to not do that again.

Acosta will join Trump's cabinet full of bankers and billionaires in the very near future, though his own net worth has not been reported by the media. If Navarro's tweet about his non-billionaire status proves true, then he'll be a minority among Trump's uber-rich political coterie.

Perhaps he'll ask Betsy DeVos if she'll loan him one of her many exclusive yacht club memberships in the near future. (She belongs to at least three…)