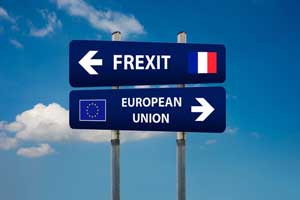 In Dow Jones news today, the Dow was flat as energy stocks slumped and investors looked abroad to a potential huge shakeup in the politics of France.

In France, markets are worried about the nation's potential shift to the left during the national election. Although the nation's far-right, anti-European Union candidate Marine Le Pen is the favorite to win the first round of voting in April, the second vote is far less uncertain.

That's because the socialist Benoit Hamon and far-left candidate Jean-Luc Melenchon are considering a deal to unite in order to beat Le Pen.

On Monday, U.S. markets will be closed in honor of President's Day. Now, here's a look at today's most important market events and stocks, plus a preview of Tuesday's economic calendar.

Political uncertainty and a lackluster day of earnings tempered the Dow Jones Friday. Shares of UnitedHealth Group Inc. (NYSE: UNH) slumped more than 3%. UNH shares fell on news that the firm is facing a lawsuit over Medicare charges from the U.S. Justice Department.

Trending: 5 of the Best Stocks to Buy Now

Geopolitical uncertainty over the future of the European Union weighed on gold prices. The price of gold today fell 0.4%. Despite the downturn, gold prices Money Morning Resource Strategist Peter Krauth has an aggressive forecast for gold prices in 2017. To see his price forecast, click here.

Snap Inc. (NYSE: SNAP), the parent company of Snapchat, has valued its company between $19.5 billion and $22.2 billion. This valuation means that the company will price shares between $14 and $16 each. But with a company that lost more than $500 million last year – and one that could not be profitable ever – is investing in this company a good idea?

To answer this question, Money Morning has put together a free Snapchat stock guide.

But the big news today was the price of crude oil.

Brent crude oil prices were mostly flat on the day as well, climbing just 0.09%. However, Brent prices had a better performance due to increased optimism over OPEC's planned deal to join Russia in reducing global production by almost 1.8 million barrels per day (bpd) during the first half of 2017. Multiple watchdogs suggest that OPEC and Russia have reached at least 90% compliance in the deal.

Oil prices have surged 50% over the last year, and Money Morning Global Energy Strategist Dr. Kent Moors forecasts another 20% rise in oil prices in 2017. For that reason, we're showing you the best crude oil stock to buy in 2017 so you can profit from soaring oil prices.

The Greatest Stock Track Record We've Ever Seen… If you want proof that you can make $100,000 starting with a small amount of money – then take a look at this new method of picking stocks we've uncovered. It's led to an astounding track record averaging FOUR double- or triple-digit peak gain winners every month for five straight years. Click here for details.