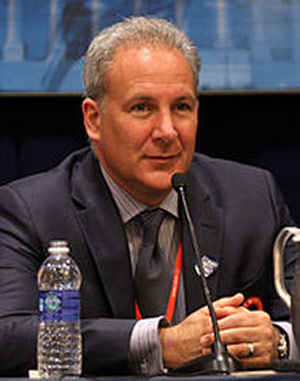 During a Feb. 14 interview with CNBC, legendary economist and Euro Pacific Capital CEO Peter Schiff made a bold claim about the U.S. Federal Reserve.

"They're going to go back to QE," said Schiff.

QE, or quantitative easing, is a fiscal policy in which a central bank creates new money in order to buy government bonds and ultimately stimulate the economy - the Fed's way of addressing the 2007-09 financial crisis.

Schiff's reasoning: Rampant inflation in the United States is just around the corner, and it's going to soar faster than the interest rate increases by the Fed.

"Inflation is headed up not just on a producer level but on the consumer level, and inflation is going to be rising at a pace that is much faster than any rate hikes that we might get from the Fed. So real rates are going to be falling even if the Fed raises nominal rates," he said.

Moreover, Schiff believes that this imminent surge in inflation may actually be the fault of the central bank...

You know it never ceases to amaze me how Peter goes on record at times with some of the most outlandish statements. My guess is he doesn't have money on the line in most cases. I might take him a little more seriously if he did.
Inflationary pressures are beginning but they are confined to certain areas. Deflationary pressures still persist because of enormous debt and the fact that consumers only have so much disposable income. Would I be short Bonds at the moment. Sure. That is a no brainer. With not much downside risk it is probably a good bet. So are certain commodities at the moment that have very little downside risk and a lot of upside like Uranium, corn and wheat to name a few. I learned not to fight the trend years ago and perhaps Peter should do the same.

Look at the CBO budget forecast for the next 30 years. The US Treasury will be borrowing 9% GDP in 2046. This is based on only current programs that are in effect today. This is not sustainable. We are Greece whether we recognize it or not. Nobody will lend to a profligate government that cannot pay its bills.