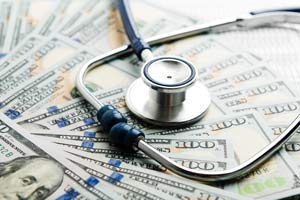 In August 2016, healthcare costs in America rose at their fastest rate since 1984.

Drug prices, premiums, and deductibles have hit an alarming level - and they're moving much faster than wages.

The never-ending rise of healthcare costs is now the biggest worry of many American families.

One out of every four (25%) Americans reported that the cost of healthcare is their primary concern right now, according to a January 2017 Monmouth University poll. That's up from 15% two years ago.

"It's also worth noting that issues that have been dominating the news, such as immigration and national security, rank very low on the list of items that keep Americans up at night," said Patrick Murray, director of the polling institute.

Here are the factors that have pushed healthcare to the top of U.S. households' "worry" lists.

How U.S. Healthcare Costs Have Climbed So High

Patients and healthcare consumers are being hit from many directions. Drugs, deductibles, and premiums are all on the rise.

Unfortunately, drug costs in the United States are growing by double and triple digits each year. Just last year, specialty drug prices grew 18.9%, The Fiscal Times reported in October 2016. Even worse, they are projected to increase another 18.7% in 2017.

Part of the reason for these soaring costs is a change in how frequently drug companies hike prices. 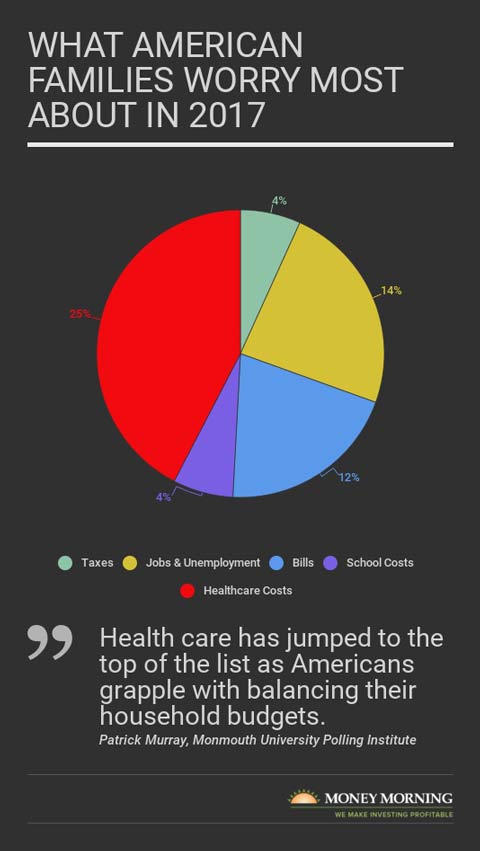 "It used to be the drug companies only took one price increase a year," said Dr. Steve Miller, chief medical officer at Express Scripts on April 27. "Now, what they're doing is taking multiple price increases multiple times a year."

According to an October 2016 report funded by the American Hospital Association (AHA), prescription drugs are now the fastest-growing segment of the healthcare sector.

Not only are drug prices increasing, but deductibles (the amount consumers pay out of pocket before insurance coverage kicks in) are up. They have skyrocketed by two-thirds for employer-sponsored healthcare plans since 2010, according to a CBS News report from August 2016.

"The growth in deductibles shows no sign of slowing," reported The Wall Street Journal in August 2016. "What consumers have been paying has been going up much faster than wages. Even people who are insured are having problems paying medical bills."

Just to have insurance is costing everyone more, whether they use it or not. The average family plan cost $18,142 in 2016, according to Kaiser/HRET Employer Health Benefits, up 3.4% from 2015.

That's noticeably faster growth than wages, which are projected to climb 2.5% in 2017 from the year before, and more than three times as much as inflation, up 1.1%.

And some consumers are struggling to keep up with these mounting costs more than others...

David Cutler, a Harvard healthcare economist, told WSJ this may be "a story of three Americas." One group, the rich, can afford healthcare easily. The poor can access public assistance, so they aren't absorbing as much of the cost increases as others.

But for lower middle- to middle-income Americans, "the income struggles and the healthcare struggles together are a really potent issue," he said.

Middle-class consumers - a single person earning more than $47,520 or a family of four with an income of $97,200 - are finding more of their healthcare costs are coming out of their own pockets than ever before.

These out-of-pockets costs have crippled the ability of the poor and middle class to access healthcare by discouraging the use of services.

"The middle class are getting squeezed," Larry Levitt, senior vice president at the Kaiser Family Foundation, said to CNN on Nov. 4. "They aren't getting subsidies and these deductibles are hard to afford."

In fact, USA Today surveyed middle-class Americans in 2015 when the ACA was freshly implemented, and the responses were shocking...

"I'm trying to come to the doctor as little as possible, because my deductible is so high," patients often claimed to physician Praveen Arla. "What's the minimum I can get done?" is the most common question he heard daily.

USA Today also reported that many of the people interviewed admitted to going without their needed treatments because of the high costs.

For example, LaRita Jacobs of Seminole, Fla., who had insurance and an annual family income of $70,000, admitted $7,500 a year in out-of-pocket costs kept her from dealing with an arthritis-related neck problem until it got so bad she couldn't lift a fork.

Many doctors contended it's only a matter of time before the middle class begins crowding ERs, wrote USA Today. They say putting off care can be dangerous, exponentially more costly and, if it continues and spreads, can threaten the health of the nation.

Now, Americans are hoping for some relief from the new administration...

What's Next for U.S. Healthcare Inflation

The GOP say they're working on a plan to repeal and replace - or at the very least, repair - the Affordable Care Act, to help with rising costs.

If the ACA were to be fully repealed, over 30 million Americans would be left without coverage - an outcome President Donald Trump hopes to avoid.

In a Jan. 15 interview with The Washington Post, President Trump said his plan to replace Obamacare will include "insurance for everybody." However, the new POTUS has not since revealed any details of how he will accomplish this ambitious challenge.

The Centers for Medicare and Medicaid Services did, however, begin to make some sweeping changes to the act on Feb. 15.

The new rule aims to tighten the ways people can enroll for coverage on health insurance exchanges, shortening the signup period from three months to six weeks. People who drop out of coverage plans before the end of the year will now also be required to pay any remaining premiums.

"The GOP is giving in to concerns from insurers who have said the markets haven't been stable and are causing them to lose money," wrote US News on Feb. 15.

Up Next: Under the watchful eye of Congress, the government will soon be implementing a controversial plan that threatens the retirement of millions of Americans. And they're using an obscure loophole buried in Title 29 of the U.S. Labor Code to do it. If you have a 401(k), IRA, or any type of retirement account, this could cause you to miss out on $68,870 or more. Learn more...

We have become very informed about the statistics of the healthcare squeeze that have created the pressure on wages today.
There is no end to this and there will be none until blame is fixed at the microeconomics level. That is to say, who is responsible for this and why does this pressure exist.
Upon further scrutiny we can see that there are forces that go unchecked. Yes, it is the costs of medication among other forces but the one that is most responsible is the right of an entity to demand a parity of sorts to a category of cost push forces such as Pharmaceuticals that go unchecked in the system. Because dollars are being paid for by insurance companies and face it, they can do nothing about it except complain and legitimately so. What it comes down to is we really have no checks and balances within our system. How can we limit the ability of taking what "they" want and getting it at the cost of getting it at the cost to others which go unchecked. Did anyone think that the cause for this is ourselves and our futility to deal with the problem properly as a society. Think about it.