Gold prices are under pressure Tuesday morning, in part due to hawkish comments from the Federal Reserve Bank of Philadelphia President Patrick Harper, who said Monday he could support a U.S. interest rate increase at the next FOMC meeting in March, if inflationary pressures are apparent.

There are several Federal Reserve officials slated to speak this week, and the latest FOMC minutes are due for release in the early afternoon Wednesday. Increasing notions of a U.S. interest rate rise occurring sooner rather than later have pushed U.S. and world bond market yields higher early this week.

In overnight news, the Euro zone Markit composite purchasing managers' index (PMI) came in at 56.0 in February from 54.3 in January. A reading above 50.0 suggests growth in the sector.

The key "outside markets" on Tuesday morning find the U.S. dollar index trading solidly higher. The greenback bulls have the overall near-term technical advantage amid a fledgling price uptrend on the daily chart.

Meantime, Nymex crude oil futures prices are higher Tuesday morning and hit a six-week high overnight. Oil prices might be seeing a bullish upside "breakout" from the recent sideways trading range that had bound the market for weeks.

U.S. economic data due for release Tuesday is light and includes the U.S. flash PMI and the flash services PMI for February. 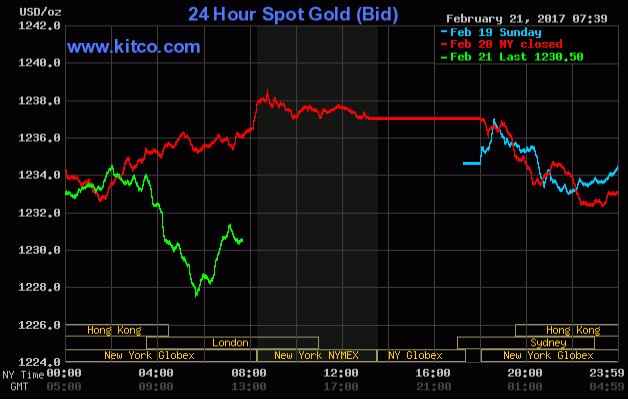