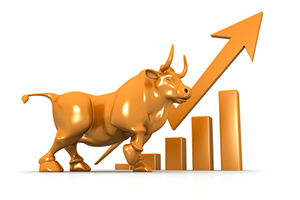 Mnuchin said tax reform could happen in August, but it might not happen until the end of 2018.

Equities continued to rally a day after the U.S. Federal Reserve showed no signs that another interest rate hike was imminent. In addition, a strong uptick in crude oil prices helped propel energy stocks.

While the Dow continued its incredible post-election rally, the Nasdaq retreated thanks in part to a 9% slump in NVIDIA Corp. (Nasdaq: NVDA).

The Dow Jones Industrial Average gained 34 points after President Trump pledged to bring millions of jobs back to the United States. Despite the pledge to bolster U.S. manufacturing, the president offered few details of his plan.

Gold prices added more than 1.3% after the Fed dampened expectations for a rate hike next month. Today's uptick could be the start of something very special for gold investors. We expect gold to rise another more than 12% to $1,400 an ounce by the end of the year. That's why Money Morning Resource Specialist Peter Krauth has put together a list of the best gold stocks to buy in 2017.

Crude prices still remained near a seven-week high thanks to increased optimism that OPEC members and Russia are on the verge of surpassing the targeted production cuts from the January meeting. The nations agreed to remove 1.8 million barrels per day (bpd) and have reached 90% compliance in a short period. Several prominent analysts have suggested that they could surpass that target in the coming weeks.

But the big story is the Snapchat IPO.

The New York Stock Exchanged announced Thursday that it will hold a trial run of Snap Inc.'s initial public offering over the weekend. The trial run is in preparation for the largest technology IPO in roughly five years. The exchange wants to test its system by sending a variety of sample orders that it might receive from clients.

While the trial is generating headlines, the real news is how you can make money on the Snapchat IPO when the company goes public next month. Remember, retail investors can't buy Snap Inc. (NYSE: SNAP) stock at the IPO offering price and make the same kind of profits as big banks and large institutions...

That's why Money Morning Director of Tech & Venture Capital Research Michael A. Robinson has devised a way for you to make money during the Snapchat IPO that you won't find anywhere else. Here's what you need to know about investing in Snapchat stock.