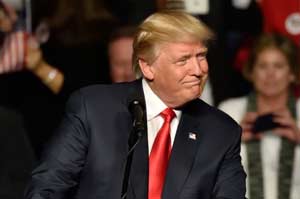 President Donald Trump may delay one of his campaign's chief economic promises until 2018, according to a report released earlier today (Feb.  23).

"There are an overwhelming number of reforms that the Trump team is pushing [first]," the reported stated.

Here's quick look at each one of these reforms the White House believes is more urgent...

1. The repeal of the Affordable Care Act (ACA): President Trump explained to CNBC yesterday that, before any other major reform is addressed, the repeal and replacement of Obamacare must come first:

"We're doing the healthcare -- again moving along very well -- sometime during the month of March, maybe mid-to-early March," the president told reporters Wednesday. "We'll be submitting something that I think people will be very impressed by."

Disagreement among congressional Republicans in recent weeks over how to replace the 2010 law have led to jeers from conservatives who expected to kill the law immediately and liberals who say the GOP doesn't have an adequate replacement plan.

GOP lawmakers have likewise been heckled by constituents at town hall meetings across America this month as they struggle to outline a clear and smooth path to a better system.

The public's mounting concern -- as well as struggles within the GOP party itself -- over the future of U.S. healthcare is keeping ACA reform at the forefront of Washington's agenda.

And immediately following healthcare, Trump's administration intends to address major policy changes regarding this fiscal "thorn in the GOP's side" next...

America will never be great again with the federal tax based on production (income, savings and investment). America's Big Solution is the FAIRtax bill HR 25 / S 18. The FAIRtax moves the tax base from production to consumption with one simple progressive sales/consumption tax system with only one tax break, called the Prebate, that helps most the impoverished and lower income. With companion legislation the FAIRtax will renew our lost Freedom, Liberty and Civil Rights with the repeal of the 16th Amendment that enables direct taxation. Learn more and join the real/true tax reform cause at bigsolution.org and #FAIRtax